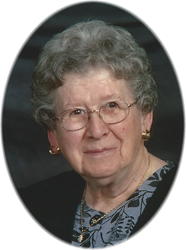 Funeral Services celebrating the life of Ruth M. Pratt, 89, Albany, will be at 11:00 AM on Friday, August 12, 2016 at Our Savior’s Lutheran Church, Albany.  Pastor Steven Olson will officiate and burial in the church cemetery will follow a luncheon.  Ruth passed away early on Tuesday morning at Mother of Mercy in Albany.  There will be a visitation from 4:00-8:00 PM on Thursday, August 11, 2016 at the Miller-Carlin Funeral Home, Albany and again after 10:00 AM until the time of service Friday morning at the church.

Ruth was born on April 16, 1927 to Albert and Wilhelmine “Minnie” (Schlueter) Hodel in Albany Township.  She grew up with her sister Ardell, attended the local school, and has lived her entire life in the area.  On May 20, 1950, she married Leslie H. Pratt at the Ebenezer Lutheran Church in Albany and their family was complete after the birth of their son Ryan.  Ruth and Leslie farmed together and she could be found milking cows, driving tractors, and later, feeding calves with her grandchildren.  Farming was more than a job to her – it was a lifestyle.  Ruth was a 4-H leader and more than 20 children “grew-up” on their farm.  They would help work the farm and be rewarded with praise and a good meal.  Ruth loved gardening, canning what she grew, making preserves, and flower gardening, especially her African violets.  Cooking was another thing Ruth enjoyed, as well baking; German chocolate cake was her favorite!  She was a woman of many hobbies such as: square dancing, playing cards, fishing, and counted cross stitch.  Ruth was very active with the American Legion Auxiliary and spent years supporting veterans by selling poppies and putting up flags in cemeteries with her grandchildren for Memorial Day.  Ruth was a proud supporter of those in the military and attended 22 army reunions.  She was a member of the Pioneer Club, loved visiting with relatives, and was considered the family historian.  Ruth was a woman of deep faith and participating in her church, Our Savior’s Lutheran, was very important to her.  She was a superintendant and teacher of Sunday School for 30+ years and also worked with vacation bible school.  She was a part of the church’s Women’s Group and participated in craft and bake sales.

She is greeted in Heaven by her husband Leslie who died in 2004, her parents Albert and Minnie, her granddaughter Anna, and her sister Ardell Christen.

Memorials are preferred to Our Saviors Faith Formation.