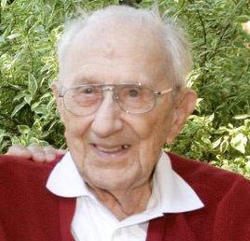 A memorial service celebrating the life of Russell Clark Stemm, age 105, of St. Cloud will take place at 11AM Saturday, February 2, 2013 at Bethlehem Lutheran Church in St. Cloud.  Pastor Dee Peterson will officiate and burial will take place at Rosehill Cemetery in Menlo, IA at a later date.  Russell died peacefully Sunday evening at St. Benedict’s Nursing Home in St. Cloud.  There will be a gathering time prior to the service on Saturday starting at 10AM at the church.  Arrangements are being made with the Miller-Carlin Funeral Home in St. Cloud.Russell was born on November 20, 1907 in Adair County Iowa to Charles and Mollie (Bridenstine) Stemm.  He graduated from Menlo High School in 1927.  In 1935 he graduated from Simpson College with a degree in Business Administration and Accounting.  After graduation he taught in high schools in Iowa for six years and then was on the Business staff at Iowa State College for several years.  On June 15, 1945 he married Irene Peterson who blessed him with three children.  The couple moved to Minnesota where he worked as Controller for North Star Dairy for 13 years and later owned and operated Stemm Transfer and Storage in St. Cloud.  He developed and sold commercial property as well before eventually retiring to Sauk Rapids.  Russell was active in church and community affairs.  He was a member of Bethlehem Lutheran Church where he was a past President of the congregation and Treasurer.  He was also a member of the Controllers Institute of America, Cost Accountants Association, Lions Club, Chamber of Commerce, St. Cloud Opportunities, and SCORE.Russell lived a true American success story with humility, integrity, charity and humor. His faith in God was instilled as a child and continued throughout his life. Russell loved his family with all his being and
consistently demonstrated it by his actions. He viewed obstacles in his life, although painful, as temporary setbacks. He lost an eye as a child in a farming accident, but still went on with his education and became an avid reader in his later years. Russell also endured many illnesses, never complaining and recovering as even a stronger person. In his business dealings, he was viewed as always being reliable and honest.Russell is survived by his children Catherine Stemm, St. Cloud; Carl (Sherry) Stemm, Brooklyn Park; his grandchildren Mina Moynehan, David Shojai, Rob Stemm, Trevor Stemm, and his great-grandson Carter Moynehan.He is preceded in death by his parents Mollie and Charles Stemm, his wife Irene Stemm who passed in 1998, his daughter Mary Shojai, and his siblings Donald Stemm, Kenneth Stemm, Dorothy Reid, Arlene Stevenson, and Florence Meisner.Memorials are preferred to the American Diabetes Association.

There will be a one hour gathering time prior to the service Saturday, February 2nd at Bethlehem Lutheran church.

Memorials are preferred to the American Diabetes Association

Carl and Cathy; Please accept my sincere sympathies and know that my prayers are with you.