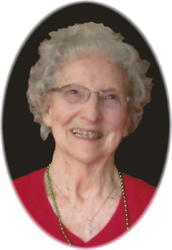 Memorial Services celebrating the life of Rosemary Ebnet, age 93, of Sartell will be at 11:00 AM on Saturday, January 17, 2015 at St. Augustine’s Catholic Church in St. Cloud.  Rosemary passed away peacefully Thursday evening with her daughters by her side.  There will be a visitation after 9:00 AM until the time of services at the church.  Arrangements are being made with Miller-Carlin Funeral Home in St. Cloud.

Rosemary was born on October 9, 1921 to Eugene and Dorothy (Mertens) Barrus in Staples.  She was raised alongside eight siblings and graduated high school.  Rosemary married Norbert Otto Ebnet on April 1, 1944 in Fort Benning, GA.  They had five children together and she worked to raise them and manage the home.  Her family recalls how much she loved crafts, every kind of craft, and that she gave handmade gifts to family and friends.  Painting with oils, watercolors, pen and ink were among her few mediums.  Rosemary loved writing and has had a number of stories and poems published.  She also enjoyed playing cards and had been in a bridge club.  Cards were a favorite pastime that she’s taught to the younger generations of her family.  Music was a major part in her life – playing the piano, singing, and enjoying the musical talents of her children.  Rosemary is remembered as being a great dancer as well.  She was a caring, sweet, and kind woman who’s smile lit up the room; she simply loved people, especially her many grandchildren.  Rosemary was a very spiritual woman who enjoyed her bible studies.  She was proud of her time at the St. Cloud Hospital where she worked as an Aide, enjoyed volunteering at the local library, and visiting nursing homes.  Rosemary was a member of St. Augustine’s Catholic Church, the Legion of Mary, and Whitney Writers.

Sweet Rosemary.  So loving and so well loved.

Our sweet, loving and kind Grandma Rose, there will never be another quite like her!  She inspires us all to treat each other with more love, forgiveness, and kindness.  Nick, Allison, and I send our thoughts and prayers to my aunts, uncles, and my mom; May God give you peace.  We love you.

Rose we will miss you very much.  We rememeber the nice visits with you when you came out to California.  Corlin had so much fun and loved going on trips around the northern area with you. I know you are in the loving hands of God and we will keep you in our prayers.

What a great lady!…you were very lucky to have her as your Mom, Peggy…may your many memories of her help ease your grief…Love, Dorothy

The passing of this precious lady brings back fond memories of several summers more than 60 years ago when I stayrf with the Ebnet family to play with my favorite cousin Gene. At that time, Aunt Rose was the First Lady of Perham. MN and I’m sure there was never a  finer one. Her warmth, love and cooking made her house home to anyone who stopped in for a visit or stayed for a week.. You would never know she was such royalty. She took us swimming at Otter Tail Lake and packed picnic lunches with the finest lunch meat and sausages made by Mayor Norb. She always looked beautiful and spoke with that soft, lovely musical voice. It’s no wonder she had so many friends. Aunt Rose never complained about the special things Gene and I would bring bring back to the house, like stray dogs, pigeons, and jars full of bugs. She was so good about reminding us to get rid of them before the Mayor got home.from work. She was one of the very best ladies one could know and I am grateful for  many wonderful memories of times with her famiy and for the beautiful family she and Norb helped create. You are a queen. Rest in Peace.

Aunt Rose was the youngest of the three beautiful Barrus Girls (my mother Katie and aunt Gen being the other two).  Each held a special kind of magic.  I remember Easter Dinner at her house, with “glorified rice” and all the fixings.  In spite of the fact that pretty much every time I came for a visit I broke something (most memorable was the time I broke the basement toilet…) Rose always treated me with kindness and love.  She was a talented writer and artist, but never pushed her accomplishments to the front.  Every memory I hold of her is filled with a smile.  As a matter of fact I don’t recall ever seeing her not smile.  As time passed … as those she grew up with and loved passed .. she remained a bastion of hope and caring and positive energy.  I would visit whenever I was able…which was never often enough.  And I tried to remember special days such as her birthday and other holidays.  Most of the time I got close, but often I missed by a week or two.  Which, from Rose’s perspective just added to the fun.  Everyone who knew Rose loved her, and everyone who knew Rose had her love.  Even if when they went home after Easter dinner they left a broken toilet in the basement, or a mess on the back porch…

So sad to hear about Rose. What a wonderful lady & great memories growing up next door.

best in town. Her art work was amazing. It has been a long time in seeing you & your family.

Please know you are in my prayers. She will not be forgotten.