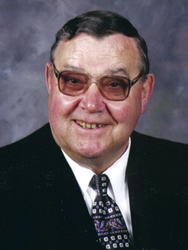 The Mass of Christian Burial, celebrating the life of Robert E. Ewertowsky, age 86 of Albany, will be 11:00 AM, Thursday, June 6 at Seven Dolors Catholic Church in Albany. Burial will be in the parish cemetery. Robert died Saturday at the Mother of Mercy Nursing Home after a long battle with cancer. There will be a visitation after 9:00 AM at the church in Albany. Arrangements are being made by the Miller-Carlin-Brenny Funeral Home in Albany.Robert was born January 29, 1927 in Farming. He was raised by his mother, Mary Ewertowsky on the family farm outside of Albany. Robert served in the U.S. Army from 1954-1956. After his discharge, he returned to the farm and worked the farm until the early 1970’s. Robert moved into Albany and began working as a meat cutter for Ebnet’s Meat Market and later he worked for Tom Thumb. After he retired, he started working for the Brenny Funeral Homes in Albany and Holdingford and he continued with the Miller-Carlin Funeral Homes. Robert is a member of the Seven Dolors Catholic Church in Albany the St. Joseph’s Society and the Albany American Legion Post 482.Robert is survived by his cousin, Bernice Gill, Albany and many friends.

There will be a visitation after 9:00 AM at the church in Albany.