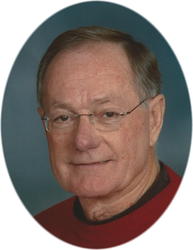 Mass of Christian Burial celebrating the life of Richard “Rich” Neu, 76, St. Cloud, will be at 11:00 AM on Wednesday, September 21, 2016 at the Church of the Holy Spirit in St. Cloud.  Fr. Tom Knoblach will officiate and burial will be at the MN State Veterans Cemetery in Little Falls.  Rich passed away with his wife at his side in the comfort of his home Saturday evening.  There will be a gathering for friends and family two hours prior to mass on Wednesday at the church.  Arrangements are being entrusted to Miller-Carlin Funeral Home, St. Cloud.

Rich was born on April 5, 1940 to Leo and Catherine (Berger) Neu in Watkins where he was raised with seven siblings.  He went to work for his family at age 16 and on Feb. 17, 1962, he married Colleen Unterberger at St. Anthony’s Church in Watkins.  Rich was drafted in the military where he earned his GED and was awarded 2 years of college credit.  He proudly served his country in the US Army from 1963-1965.  He and Colleen settled down in the south side of town while he began his career as a Route Driver for Pan ‘o Gold Bakery.  Rich took great pride and took care of so many things throughout his life that are worth noting and remembering.  He is remembered for tending to his yard with a gardener’s delight, going all out in decorating his home for Christmas, caring for the animals that flocked to him.  He fed the birds and relocated the rabbits and squirrels, finding them better homes.  Rich enjoyed playing golf and tennis and spent hours in pursuit of those sports.  Fishing, however, was his favorite pastime.  He knew the best lakes, where the fish were biting, and he caught all kinds.  Rich enjoyed spending time with family and friends – fishing, playing cards, talking, and joking.  He was known for being kind and helpful, always to ready to lend a hand to someone in need.  Rich was a smart and witty man who was a genius with his hands.  As a jack-of-all-trades, he could build anything and worked for so many people.  He was an active member of the Church of the Holy Spirit and the Post 76 American Legion.

Rich is survived by his wife of 54 years, Colleen; his siblings Frank (Janet) Neu, Rockville; Theresia (Ralph) Linn, Watkins; Dan (Jacquelyn) Neu, St. Cloud; Rose Cota, St. Cloud; his sister-in-law Rita Neu-Lomheim; as well as other family and friends.  He will be missed by many who’s lives he touched.

He is greeted in Heaven by his parents Leo and Catherine Neu, brothers Roman, Vern, and Andy Neu, and his brother-in-law Charles Neu.

so sorry for your loss. you are in our prayers and thoughts

Rich will be greatly missed by all.  There was always a smile on his face.  Such a kind man.

I am so very sorry for your loss.  I will always remember seeing Rich come home from work in his delivery truck while I was visiting my Aunt and Uncle who lived next door to you.  It was a highlight when Rich would show us kids the back of the truck!  I also remember Rich tending to your lawn like it was a pristine park!  You know, I watched him do that so often that I am actually the same way!  Rich taught me something about pride in one’s yard.  Over the years, I have read about Rich on his Caringbridge site.  I am thankful that Rich is at Peace and no longer has any suffering or pain.  Your husband was such a nice man and will be greatly missed♥

Prayers and Hugs to you, Colleen.

I am so sorry to hear of Rich’s passing, you are in my thoughts and prayers