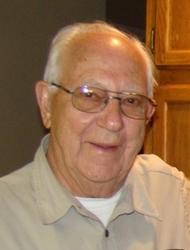 Funeral services celebrating the life of Raymond “Ray” Stephen Raetz age 87 of Hackensack will be 10:30AM Tuesday, November 26, 2013 at St. Mary’s Cathedral lower church.  Father Tony Oelrich will officiate and burial will take place at the Minnesota State Veterans Cemetery following the mass.  Ray died peacefully at the St. Cloud Hospital with his family at his side Friday morning.  There will be a one hour gathering prior to the funeral service Tuesday morning at the church.  Arrangements are being made with the Miller-Carlin Funeral Home of St. CloudRay was born April 8, 1926 to Bartholomew and Christine (Illigen) Raetz in Hasting, MN.  He served in the U.S. Air Force during the time of WWII from 1943-1946.  Ray married Joan M. Rougier on June 23, 1951 in Osseo.  He conducted his studies at St. John’s University where he attained his undergraduate and the University of Minnesota where he achieved a masters degree in Business Administration.  Ray worked as an accountant and controller for General Mills, Control Data, and Holes Webway before his retirement.  He was a member of the 6th Bombardment Group, the Ten Mile Lake Association, and currently Sacred Heart Catholic Church in Hackensack.  Ray loved  spending time outdoors, especially any time he got to hunt and fish.  He was known as quite the handyman which was shown through his woodworking.  Ray was also known as somewhat of a rock hound where he would search for and polish precious stones found in the hills and mountains of Arizona.   What Ray loved most in life though was the time he got to spend with his family.Ray is survived by his wife Joan Raetz, Hackensack; his children Paul (Lucy) Raetz, St. Cloud; Mary (Randy) Mattheisen, St. Cloud; Stephen (NancyJo) Raetz, Sartell; his grandchildren Jacquelyn, Antonio, Joan, Paul, Michael, and his great-granddaughter Alivia.He is preceded in death by his parents Christine and Bartholomew Raetz, and his sister Mary Catherine Dess.

Funeral services celebrating the life of Raymond Ray Stephen Raetz will be 10:30AM Tuesday, November 26, 2013 at St. Marys Cathedral lower church. Father Tony Oelrich will officiate and burial will take place at the Minnesota State Veterans Cemetery following the mass.