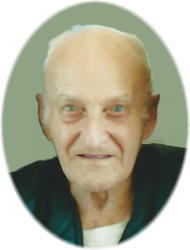 Services celebrating the life of Raymond “Ray” George, 82, Holdingford, will be at 3:00 PM on Saturday, October 22, 2016 at the Miller-Carlin Funeral Home in Holdingford.  NAME will officiate.  Ray passed away early on Oct. 20, 2016 at the St. Cloud Hospital.  There will be a visitation from 1:00-3:00 PM Saturday afternoon at the funeral home before the service.

Ray was born on April 6, 1934 to Theodore and Auriela (Ricker) George in Rose City.  He was raised with four siblings and grew up in a farming family.  Ray joined the United States Army and proudly served his country.  After marrying, he moved to the Twin Cities before returning to Holdingford to farm.  Throughout his life, Ray worked as a security guard, fabricator, truck driver, and janitor – but his passion was farming.  Dairy cows, beef cattle, and John Deere tractors were his loves.  Ray also enjoyed woodcrafts, attending and holding auctions, fixing things, and collecting lawn ornaments.  He could be a stubborn may who was set in his ways but he was able to to talk to anyone he met.  Ray loved to meet new people and liked to talk about his favorite TV shows: “The Price Is Right” and “Shark Tank.”

He is preceded in death by his parents and his brothers Jerome and Stanley George.

So sorry to hear of Ray’s passing. Our thoughts and Prayers with all the family.

I have many thoughts and remembrances about our “play-time” together.   Your parents were very good friends of my parents.  Now you can link arms with your brothers, Jerome and Stanley.  We pray for your soul to sail right into the heavenly site provided by our Good Lord!  Peace Be With You!