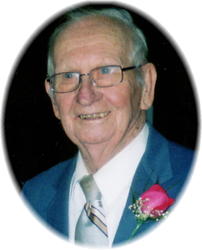 Services celebrating the life of Norbert Otto Ebnet, age 92, of Sartell, will be at 12 Noon on Saturday, February 9, 2013 at the Miller-Carlin Funeral Home in St. Cloud.  Father Al Stangl will officiate and burial will take place at the Minnesota Veterans Cemetery at Camp Ripley in Little Falls at a later date.  Norbert passed away peacefully Sunday morning in his sleep.  There will be a visitation from 10:00 AM until the time of service on Saturday, February 9, 2013 at the funeral home in St. Cloud.  Arrangements are being made with Miller-Carlin Funeral Home in St. Cloud.Norbert was born on May 12, 1920 to Margaret (Liebsch) and Simon Ebnet in Holdingford.  He grew up in the area with his seven siblings and graduated high school before entering the United States Army.  Norbert served his country during WWII in Germany and during the Battle of the Bulge.  Norbert married Rosemary Barrus in Fort Benning, GA on April 1, 1944.  She commented that she loved his blue eyes and curly hair.  He learned the trade of butchering from his father, who taught him as a youngster on the family farm, and went on to be a self-employed butcher in Perham and Elbow Lake.  Norbert also spent time as the Mayor of Perham.  Music was his biggest passion and led him to participate in a band when he was a young man.  His family remembers that no gathering was without singing or playing the guitar.  He worked with his hands all his life and, after retiring, became an accomplished woodcarver.  Norbert made willow canes, beautiful ducks and also gifted completed Nativity Sets for his children.  He is well-remembered for his storytelling and his passion for jokes, especially the Ole and Lena ones.  Norbert loved to dance and could be found teaching ballroom dancing with Community Education groups or kicking up his heels in local square dancing clubs.  He was also a popular square dance caller from ages 25-81.  Norbert was a member of the Knights of Columbus and the VFW Post #428.  He belonged to the St, Augustine’s Church and was a member of the church choir.Norbert is survived by his wife of 69 years Rosemary; his children Eugene (Jeanette) Ebnet, Hutchinson; Pamela (Bernie) Evans, St. Cloud; Samuel (Barb) Ebnet, Kingman, AZ; Peggy (Tom) Soucek, Litchfield; Patrice (George) Hough, Elbow Lake; his sisters Helen Root, Frances Breth, and Christine Wagar; 20 grandchildren; 39 great grandchildren; and 1 great-great grandchild.He is preceded in death by his parents Margaret and Simon Ebnet; infant daughter Mary Louise; sister Bernadine Wensmann; and brothers Bernard, Victor, and Lawrence Ebnet.Memorials are preferred in lieu of flowers to Country Manor Foundation Spiritual Care 520 1st Street NE – Sartell, MN 56377.

There will be a visitation from 10:00 AM until the time of service on Saturday, February 9, 2013 at the funeral home in St. Cloud.

Condolences to the family. We just want our dear friend, Patty, to know that we are thinking of her and praying for peaceful hearts for the family.

Our sympathy to the Ebnet families. We are sorry for your loss.

Sorry to read about your dad. My thoughts are with you