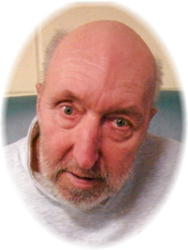 Mass of Christian burial for Norbert Joseph Frie, age 77, of Albany formerly of South St. Paul, will be at 11:00 AM Tuesday, April 2, 2013 at St. Mary’s Catholic Church in Upsala. Father John Odero will officiate and burial will take place at Fort Snelling. Norbert passed away early Palm Sunday morning surrounded by family. There will be a visitation from 4:00-8:00 PM Monday, April 1, 2013 at St. Mary’s Catholic Church in Upsala and again after 10:00 AM until the time of service on Tuesday at the church. Parish prayers will be at 7:00 PM Monday night at the church. Arrangements are being made with Miller-Carlin Funeral Home, Holdingford.Norbert was born on April 29, 1935 in Ward Springs, MN to Al and Teckla (Finken) Frie. He was one of seven children. Norbert joined the Army National Guard in 1957. He married Helen Vierling on May 16, 1970 and together they raised a daughter, Joyce, in South St. Paul. Norbert worked as a welder for over twenty years at BMT in Eagan. He loved to deer hunt, go bowling with his wife, and making music. He enjoyed playing the accordion, the harmonica, and the guitar. His three granddaughters were very important to him and brightened his days. Norbert was a lifetime member of the Knights of Columbus. He loved the church, was an active usher, and most recently belonged to St. John Vianney for 20-plus years, before moving to the Albany area.Norbert is survived by his daughter, Joyce Frie, Blaine; his granddaughters Briana, Amya, and Myana, Blaine; his siblings Werner (Anna) Frie, Burtrum; Ilene (Dennis) Murray, Arlington, WA; Elmer (Ruth) Frie, Swanville; Fred (Madonna) Frie, Burtrum; Lorraine Frie, Swanville; Mary Frie, Swanville; nieces, nephews, and many friends.He is preceded in death by his wife of 30 years, Helen, in 2000; his parents Al and Teckla Frie; and an infant brother.

There will be a visitation from 4:00-8:00 PM Monday, April 1, 2013 at St. Marys Catholic Church in Upsala and again after 10:00 AM until the time of service on Tuesday at the church. Parish prayers will be at 7:00 PM Monday night at the church.

very sorry to hear of the passing way of Norb…I remember very well of the great music you made years back, went to many of the places you played at.

I’m so sorry to hear about uncle Norb,he was a wonderful uncle, I hope he and Helen are dancing a poka!