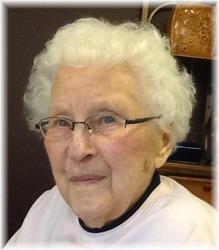 A Celebration of Life and a time of sharing for Myrtle Overdahl, age 102, of St. Cloud, MN formerly of Elk Point, SD will be at 7:00 PM on Monday, October 7, 2013 with a visitation starting at 5:00 PM Monday, at the Miller-Carlin Funeral Home in St. Cloud.  Pastor Matt Hebert will officiate.  There will be a  service at 2:30 PM on Wednesday, October 9 at St. Paul Lutheran Church in rural Elk Point, SD; the home church of Myrtle’s baptism, confirmation and marriage. The burial will be in the church cemetery, which has been her family’s burial ground for three generations and 150 years.  Arrangements are being made with Miller-Carlin Funeral Home in St. Cloud, MN.Myrtle was born January 4, 1911 near Elk Point, SD to Sivert and Anna (Satter) Eidem.  She grew up on the Brule Creek on the farm settled by her Norwegian immigrant father.  Myrtle graduated from high school in the class of 1928 from Augustana Academy in Canton, SD.  She continued her education with teacher training at Augustana College in Sioux Falls, SD.  She loved her nine years of country school teaching in South Dakota rural districts including Lennox, Richland, North Spink, and South Sioux Falls.  On June 2, 1939, she married Ernest Overdahl at St. Paul Lutheran Church, Elk Point, SD.  Together they farmed in the area until they bought a farm near Worthington, MN in 1946.  There, they continued farming, raised their four daughters, were members of First Lutheran Church in Worthington, and were active in the community.  In 1975, they served on a mission station in Liberia, West Africa and formed lasting relationships with many Liberians.  In 1991, they moved to St. Cloud, MN during which time they were members of Bethlehem Lutheran.  In 2005, three years after her husband’s death, Myrtle moved to an independent apartment at Summerwood (Presbyterian Homes) in Plymouth, MN.  It was worth noting that this move, at age 94, necessitated her giving up the early morning water aerobics routine at a local gym.  After six years among dear and loyal friends at Summerwood, Myrtle returned to St. Cloud in 2011 where she resided at Talahi Senior Campus.  Myrtle’s life was characterized by her spirit of gratitude and contentment, her love of Jesus Christ, and her desire to be a blessing to others.  She expressed her creative bent in many ways throughout the years including sewing, writing, rosemaling, and painting.  Her best watercolors were done in the 90s.  Her 100th birthday was a memorable event that will long be cherished by her family members.She was preceded in death by her parents, all of her five siblings; Bertha Leer, Samuel Eidem, Selma Nelson, Mayme Eidem, and Amos Eidem, and her husband.  She is survived by her four daughters: Solveig (Joel) Goldstrand of Plymouth, MN; Mary Ratliff of Eagan, MN; Signe (Greg) Lupfer of Amelia Island, FL; and Gretchen (Scot) Hutton of St. Cloud, MN; 14 grandchildren; 30 great-grandchildren; and one great-great-grandson.The family would like to express appreciation for the kind and considerate care that Myrtle has received at Talahi Nursing and Rehab Center, from Barbara Bollinger, M.D. of CentraCare, and with St. Croix Hospice.

There will be a visitation from 5-7PM, Monday October 7th at the Miller Carin Funeral Home in St Cloud

A Celebration of Life and a time of sharing for Myrtle Overdahl, age 102, of St. Cloud, MN formerly of Elk Point, SD will be at 7:00 PM on Monday, October 7, 2013 with a visitation starting at 5:00 PM Monday, at the Miller-Carlin Funeral Home in St. Cloud. Pastor Matt Herbert will officiate. There will be a service at St. Paul Lutheran Church in rural Elk Point, SD; the home church of Myrtles baptism, confirmation and marriage. The burial will be in the church cemetery, which has been her familys burial ground for three generations and 150 years. St. Paul Lutheran Churchs official address is: 31903 475th Avenue, Elk Point, SD, 57025.

My family lived next door to Myrt and Ernie Overdahl on West Lake Ave in Worthington, MN. They were the nicest people you could ever meet. Rest in peace, you will be missed. Thoughts and prayers to your family.

I grew up in Worthington, Minnesota, a classmate of Signe’s and knowing the Overdahl family all my life. I have many fond memories of visiting the farm. Our families knew each other through church. Myrtle was a gentle, welcoming, happy woman of faith – always kind to the friends of her children. Her kitchen is the place I remember best. What an example of a life well lived! Solveig, Mary, Signe, and Gretchen – I send you my sympathy and love and hope to be at the service on Monday.

Wayne was neighbors with Ernie & Myrtle until they moved into Worthington. We purchased part of the farm from them. Wayne used to feed cattle with them. They were instrumental in getting Wayne started in farming. Myrtle would often bring the family out to visit the farm & us. We have very fond memories of the Overdahls. We offer our sympathy to all that knew them. We will miss her.

Our wonderful aunt will be missed! We are always inspired by her creative and continual demonstrations of the love and joy of Jesus that filled her heart, soul and life! Unforgettable! We thank our Lord upon our every remembrance of Aunt Myrtle! (Phil 1:3)

Such a wonderful family that moved into our country neighborhood when I was nine years old. Great memories of our times together. The Jeppesen, Overdahl, and Greve parents took turns transporting us into Worthington public school for several years before our country school closed. Your mom hosted my bridal shower in 1959. Your parents were always so warm and friendly. Enjoyed being at Myrtle’s 100th birthday party. Such a grand Christian lady. Sorry we cannot be at the visitation. Our sympathy to Solveig, Mary, Signe, Gretchen and families. God bless, Carol & Don

Deepest sympathy to you in the loss of your Mother. Your Mom and dad were special people. I got to know them real well when my Dad was ill and a patient at the VA hospital in Minneapolis. If I remember correctly Scott was a Dr for Dad. Thoughts and prayers to you and your family as you celebrate the passing of a wonderful person and her long wonderful life.

Myrtle came into my life at Gustavus over 50 years ago. And in my life she has remained.

Myrtle always had a welcoming and happy spirit.
As a neighbor, I became friends with Gretchen and spent many hours with the Overdahl family. Myrtle encouraged us with 4-H music, baking and sewing. She showed us how to enjoy farm life to the fullest. We offer our deepest sympathy.

I remember the day “My little Myrtle” came to Talahi, she was so kind and sweet and she was like that everyday after too, always had a smile and a kind word. She shared little secrets of life with me I will charish forever in my heart. I will never forget her she was a true blessing to all who knew her. I wish I had met her years ago, but an honored to have cared and known her. My sympathy to all her “girls”, you where all wonderful to her and she adored you all.