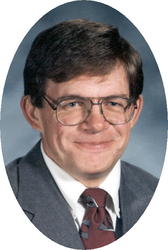 On March 21, 2017, a kind and playful spirit left this earth. Services celebrating the life of Monroe Anker, age 71, of St. Cloud, will be 11:00 AM, Tuesday, March 28 at the Miller-Carlin Funeral Home chapel in St. Cloud.  There will be a visitation at the funeral home after 10:00 AM Tuesday. Burial will be at Fort Snelling National Cemetery at a later date. Monroe died Tuesday at Abbot Northwestern Hospital in Minneapolis.

Monroe was born November 17, 1945 in Fargo to Elmer and Arla (Huseby) Anker and was raised in Flom, MN. After graduating from Twin Valley High School in 1963, Monroe attended Moorhead State University and graduated in 1975 with a degree in Education. His college time was interrupted by the draft and Monroe entered the U. S. Air Force, serving during the Vietnam conflict, 1969-1973. Unable to resist that handsome guy with the impish smile, Evelyne Reichenbach married Monroe on August 19, 1972 in Grand Forks. They spent their first year of married life in Bedford, England, where Monroe was stationed at RAF Chicksands. The couple moved to the St. Cloud area in 1975 where Monroe began his 30-year career as a Special Education Teacher at Sauk Rapids-Rice High School. Retirement in 2005 gave Monroe more time for DIY projects, shopping Menards and pawn shops, watching the Science Channel and Antiques Roadshow, and traveling with Evelyne all around Europe. Music, photography, and genealogy were also among Monroe’s passions.

Holding Monroe in their hearts are his wife, Evelyne, St. Cloud; his brother Myron (Lana) Anker, Shakopee; and his brother Ardean (Susan) Anker, Pine Springs, MN. Monroe is also survived by several nieces and nephews. Monroe was preceded in death by his parents; his brother, Marlowe Anker; his niece, Danielle Anker; and his nephew, Mark Anker.

There will be a visitation at the funeral home after 10:00 AM Tuesday, March 28th

There will be a visitation at the funeral home after 10:00 AM Tuesday, March 28th

Services celebrating the life of Monroe Anker, age 71, of St. Cloud, will be 11:00 AM, Tuesday, March 28 at the Miller-Carlin Funeral Home chapel in St. Cloud.

Services celebrating the life of Monroe Anker, age 71, of St. Cloud, will be 11:00 AM, Tuesday, March 28 at the Miller-Carlin Funeral Home chapel in St. Cloud.

Our hearts go out to the entire family. We have only gotten to know Monroe and Evelyn over the last few years and it was an amazing experience. So honored to be related to such a sweet man. We will miss him dearly and the interesting emails he would send. We are so sorry we didn’t come to visit sooner. We know he is catching up with our mom in heaven and sharing stories. God Blessings on your family.

Deepest condolences. You will be in my thoughts and prayers.

From our time together at SRRHS, I recall what a caring and gentle teacher Monroe was. When he retired, he could never truly be replaced.

Thoughts and prayers to all the family. Monroe was the kindest and most caring special ed. teacher.I loved working with him. He also had a great sense of humor. Diane Haakonson

So sorry for your loss. Monroe was a kind, caring man who will be greatly missed.

I am so sorry to hear of Monroe’s passing.   He was a very kind man.   You are in my thoughts and prayers.

Your friend and neighbor,

This is the first time since late Dec that I’m sitting down to catch up with our computer messages – quite strange.  I hope your grief has softened somewhat — I think of you daily.  Monroe’s wonderful photo is an excellent reminder – brings back the fondest memories of one of my dearest friends.  I’m sorry I can’t type any more – my fingers don’t type well at all – darn.  My fondest thoughts are with you.  I wish you joy each day.  Please stay in touch.  If we can do anything to help you please let us know.    Audrey