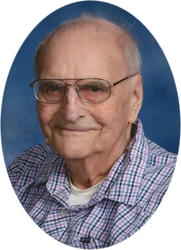 Mass of Christian Burial celebrating the life of Michael F. “Mike” Blenker, age 98 of Albany will be 11:00 AM Monday December 15, 2014 at Seven Dolors Catholic Church in Albany with a Visitation one hour prior to the Mass. Father Brad Jenniges, OSB and Fr. Eberhard Schefers will Co-officiate and burial will take place in the parish cemetery. Mike passed away peacefully on December 10, 2014 at the Mother Of Mercy Nursing Home. Parish prayers will be at 10:00 AM at the church. Honorary Pallbearers will be the members of the Catholic United Financial Council #400. Funeral arrangements are being made with the Miller-Carlin Funeral Home of Albany.

Mike was born on August 19, 1916 to Frank and Mary (Hiltner) Blenker in Albany, MN. Mike grew up and worked on his farm outside of Albany and lived his entire life in the Albany area. He married Olivia Schefers on November 14, 1944 in Richmond, MN. He was a member of the Seven Dolors Catholic Church and the Catholic United Financial Council #400. Mike enjoyed fishing and playing cards. He also enjoyed spending time with this family and friends.

He is survived by his brother, Andrew Blenker of Albany, and a sister Frances Metzger of Kennewick, WA; several nieces, nephews, other relatives and friends.

He is preceded in death by his parents Frank and Mary; his wife, Olivia; five siblings: Leo, Joseph, Roman and Herman Blenker, and Marie Schefers.

There will be a visitation one hour prior to the Mass. Parish prayers will be at 10:00 AM at the church.