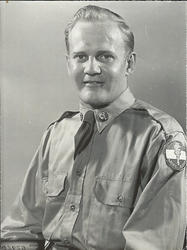 The Mass of Christian Burial, celebrating the life of Marvin Bihl, age 90 of Clearwater, will be 11:00 AM, Tuesday, October 18 at the St. Luke’s Catholic Church in Clearwater.  Burial will be in the parish cemetery.  There will be a visitation from 4-8:00 Monday and again after 10:00 AM, Tuesday at the church in Clearwater.  St. Luke’s parish prayers will be at 6:30 Monday evening.  Arrangements are being made by the Miller-Carlin Funeral Homes.

Marvin was born December 19, 1925 in Hibbing to Oscar and Ida (Mills) Bihlaja.  He grew up in Hibbing and entered the U.S. Navy during WWII.  After his discharge he attended and graduated from the University of Minnesota with a degree in Electrical Engineering.  He entered the U.S. Army and served until 1952.   After his discharge,  Marvin married Laura Elsen on December 27, 1952 in St. Joseph’s Catholic Church in Delano, MN.  The couple moved to Minnetonka and Marvin began traveling the world as an electrical engineer for 3M International.  In 1972, Marvin and Laura became pioneers in organic farming with their farm in Clearwater.   Marvin retired from 3M in 1991 and the couple moved to Clearwater in 1992 where they continued their organic farming.  Marvin was a member of St. Luke’s Catholic Church in Clearwater, the St. Luke’s Knights of Columbus and the Clearwater American Legion.

Memorials are preferred to Catholic Charities.

I’m so proud to have known your father, Jeanne. He was such a gentleman – that’s about the only word that can summarize how sweet and kind and gentle he was, with quite a sense of humor to bat. He will always look down on you and protect you and your mom. That’s what gentlemen do. I’m praying for him and for your family during this difficult time. Love, Mary Jo

No words can express the sorrow one must feel at this difficult time but may it be softened with remembered joy.  Know that you, your mom and your family are in our prayers.

Although we did not personally meet your dad, we felt like we knew him through you and how lovingly you spoke of him.  A love that echoes through your heart; a place where warm memories will always remain. May God comfort you as you remember his special life. Love, Sarah and Bob