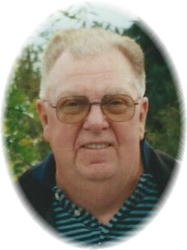 Services celebrating the life of Marvin L. Rau, 83, of Sauk Rapids, will be at 2:30 PM on Saturday, March 22, 2014 at the Miller-Carlin Funeral Chapel in St. Cloud.  Pastor David Franzmeier will officiate.  Marvin died unexpectedly following a fall in his home Friday evening.  There will be a visitation after 12:30 PM until the time of service Saturday afternoon.  Arrangements are being made with the Miller-Carlin Funeral Home of Saint Cloud.Marvin was born in Clearwater on August 18, 1930 to Herman and Jorgine (Nielsen) Rau.  He was raised alongside his seven siblings.  On Feb. 10, 1951 Marvin married Mary Schultz in Duluth, and together they had five children.  They owned Crest Fiberglass Boat Industry, which built boats, and the Golden Fork Cafe.  Marvin worked for Frigidaire for 44 years, making his way from laborer to General Supervisor.  He enjoyed hunting, fishing, cooking, and automobiles.  A favorite pastime was going to auto auctions; he was able to fix most anything!  Marvin wintered in Texas and enjoyed spending time with his children and grandchildren.  His children laughed when remembering him fondly as a “professional potato picker,” who would pick them and give them away to everyone he knew, like the folks at the local assisted living center, his family and friends, and even his doctor.Marvin is survived by his children Bruce (Margo) Rau, Clearwater; Sharen (Darrell) Melby, Royalton; Diane (Hugh) Skaja, St. Cloud; Brenda Kontz, Sauk Rapids; Daniel Rau, St. Cloud; his siblings Bill (Sandy) Rau, Sartell; Glenn (Donna) Rau, Rice; Ann Kelly, Princeton; Don (Carol) Rau, Arizona; as well as his 12 grandchildren and 21 great-grandchildren.He is preceded in death by his parents Herman and Jorgine, his brothers Robert and Richard, his sister Sophiea, and his longtime companion Joyce French.

Services celebrating the life of Marvin L. Rau, 83, of Sauk Rapids, will be at 2:30 PM on Saturday, March 22, 2014 at the Miller-Carlin Funeral Chapel in St. Cloud. Pastor David Franzmeier will officiate.

So sorry for your loss. Marv was a great guy. We’ll see all of you at the service on Saturday. Love Stephy and family.

Our deepest SYMPATHY to family. YOUR FATHER IS Making his way on a new JOURNEY…he will meet my mother and granddaughter and they will play CARDS TOGETHER and will not be lonely…..