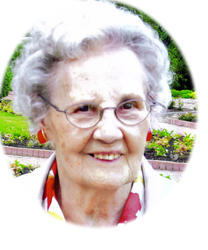 The Mass of Christian Burial, celebrating the life of Marie H. Seitz, age 92, of Holdingford, will
be 3:00 PM, Monday, October 17 at All Saints Catholic Church, River Street (formerly St.
Mary’s) in Holdingford.  Fr. Scott Pogatchnik will officiate, burial will be in the Sacred Heart
parish Cemetery in Freeport.  Marie died Thursday morning at Mother of Mercy Nursing Home in
Albany.  There will be a visitation from 4-8:00 PM Sunday and again after 2:00 PM Monday at
the church in Holdingford.  Arrangements are being made by the Miller-Carlin-Brenny Funeral
Home in Holdingford.Marie was born May 16, 1919 in Padua, rural Sauk Centre, to Ignatius and Helena (Kiffmeyer)
Mayer.  She married Edwin Seitz on January 7, 1939 in Sacred Heart Catholic Church in
Freeport.  Marie lived most of her life in Stearns, Morrison and Benton Counties, including
Farming, Freeport, Royalton, Little Rock, Gilman, Bemidji and finally, Holdingford. She often
reminded her children of the ten plus times the family relocated with packing and unpacking. She
was a homemaker and she also worked as a  waitress at Charlie’s Café in Freeport.  Marie
volunteered for the Bloodmobile, the Senior Center and she delivered Meals on Wheels.  She
enjoyed quilting, baking, dancing, singing and playing cards, A hand of “500” she loved being part
of, especially when her opponents made a bid of 9 and didn’t come up on the winning side.  She
was a member of St. Mary’s Catholic Church the St. Mary’s Christian Mothers and she was on
officer with the St. Joseph’s Society Catholic Aid.Marie is survived by her children; Carol (Don) Tembreull, Freeport; Jean (Mike) Herold, Anoka,
MN; Mary Ann (Ron) Youso, Foley; Helen (Butch) Feia, Sauk Rapids; Mike (Elizabeth) Seitz,
Carefree, AZ; Pat (Mike) Sauerer, Avon; Paul (Bernice) Seitz, Holdingford; Rita (Bob) Jarnot,
Holdingford; Joan Pilarski, Albany; Susan (Don) Breth, Holdingford; Judy (Dan) Pogatchnik,
Avon; Kathleen (Russ) Dugger, Elk River and Al (Gwen) Seitz, Sauk Centre.  She is also
survived by her brother, Francis Mayer, Sauk Centre; her sisters; Rose Spaeth, Lino Lakes; and
Peggy Littlefield, Portland, OR; 43 grandchildren and 78 great-grandchildren and many nieces and
nephews.She is preceded in death by her parents, her husband of 46 years, Ed, in 1985, her son-in-law,
William Pilarski, her sisters, Hildegard Killeen, Leona Pfieffer, Cecilia Rooney, Irene Essler and
her brother, Clarence Mayer.In lieu of flowers, memorials are preferred to the Alzheimer Association and/or Poor Clares.

There will be a visitation from 4-8:00 PM Sunday and again after 2:00 PM Monday at the church in Holdingford

In lieu of flowers, memorials are preferred to the Alzheimer Association and/or Poor Clares.

To the Marie and Ed Seitz family from Diane Seitz Merz of the Joe and Marie Seitz family.

I regret that I was not able to attend any of Marie’s services but want to extend my sincere sympathy to all of you daughters, sons, grandchildren and great grandchildren of Marie.

I marvel at the years of committment Marie and Ed gave to raising their family, not unlike my own parents. Marie was a devoted wife, committed mother and precise housekeeper. I recall when she had Al at her age and after all of you that preceded him. Remarkable and unheard of today. Cheers to Marie and Ed and the rest of the those large Seitz families.