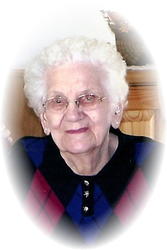 A Mass of Christian Burial celebrating the life of Marian Hartung, age 92 of Sartell, MN formerly of  Holdingford, MN will be 11 AM Wednesday, October 13, 2010 at St. Mary’s Catholic Church in Holdingford.  Marian died Saturday at the Country Manor Health Care Center, in Sartell.  Burial will be in Sacred Heart Parish Cemetery, Arban, MN.  A visitation will be from 4-8 PM Tuesday at the Miller-Carlin-Brenny Funeral Home in Holdingford and one hour prior to services at St. Mary’s Catholic Church.  St. Mary’s Christian Mothers will pray a rosary at 7PM followed by Parish Prayers at 7:30 PM Tuesday at the funeral home in Holdingford.  Arrangements are being made by Miller-Carlin-Brenny Funeral Home, Holdingford.Marian was born on February 28, 1918 in Fairmont, ND to William & Rose (Hunhoff) Hoffman.  Marian’s father died in the flu epidemic of 1918.  When Marian was a young child, Rose married Anton Ruf.  Marian then lived on Anton’s farm near Holdingford until she married August Hartung on September 23, 1936.  Marian and Gust farmed on the Hartung family farm until 1947 and then moved to the Anton & Rose Ruf farm.   Gust & Marian had 4 children: Marvin, Ronald, Glenn, and Janice.Marian was a member of Sacred Heart Catholic Church in Arban and the St. Mary’s Catholic Church in Holdingford.  She was a life member of the Christian Mothers Society and involved in many church activities.  She also spent many years working with 4H groups.  The last 15 years were spent at the Country Manor Apartments and Health Care Center in Sartell.Marian was a people person.  When you met Marian she wanted to know about you, your family, where you lived and anything else that may be of interest.  You were always welcomed into her home and usually had something to eat before you left.Marian’s family would like to thank the staff at Country Manor for the wonderful care and activities offered while she was a resident.Marian is survived by her 4 children, Marvin (Pam) Hartung, Bloomington, Ronald (Ann) Hartung, Lake City, Glenn Hartung (Sue Bowen), Apple Valley and Janice  (Ivan) Lokhorst, Rosemount, 6 grandchildren, 6 great-grandchildren, & siblings, Alma Skaj, Sartell, Clarence (Alberta) Ruf, Port Charlotte, FL, & Francis (Joan) Ruf, Glendale, AZ.Marian was preceded in death by her husband August in 1999, her parents, brother Anthony Ruf, sister Margaret Tuohy, and brothers-in-law John Tuohy and Max Skaj.Memorials are preferred to the Country Manor Chapel Building Fund, Sartell, MN.