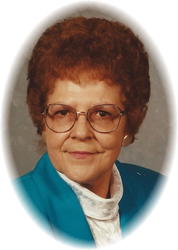 Mass of Christian burial celebrating the life of Lucille Hildegard Eibensteiner, age 82 of Albany will take place at 11AM, Wednesday, August 6th at Seven Dolors Catholic Church in Albany.  Father Brad Jenniges, OSB will officiate, and burial will take place in the parish cemetery following the service.  Lucille died at the Albany Hospital Saturday afternoon after a two year battle with cancer.  There will be a visitation for Lucille from 4-8PM on Tuesday, August 5th at Seven Dolors and again from 10AM until the time of the service Wednesday morning once again at the church.  Parish prayers will take place at 4PM and the Christian Mothers will pray the rosary later at 6PM Tuesday evening at the church.  Arrangements are being made with the Miller-Carlin Funeral Home of Albany.Lucille was born August 23rd 1931 to Peter and Catherine (Notch) Van Heel in Freeport.  She married Werner Eibensteiner on August 27, 1951 at St. Anthony’s Catholic Church in St. Anthony.  The couple lived on a farm near Sauk Centre after marriage but also lived in Waite Park and Woodbury before eventually moving back to Albany where she lived the rest of her life.  During her life Lucille worked at a variety of locations including Shopko, Brown and Bigelow, F.S.I., the Albany Bakery, the Red Cross, and Cracker Barrel before retiring in 1999.  Lucille was a very active person with a variety of hobbies and interests.  She had a love of the outdoors which was shown through her beautiful gardens over the years.  She also greatly enjoyed fishing, especially for Sunfish.  She could catch more sunnies with a drop line and sweet corn than others could catch with real tackle and bait.  She also had a love of music especially classic country and bluegrass.  What she will be remembered most for however will be her amazing heart and her wonderful sense of humor.  She was a member of Seven Dolors Catholic Church in Albany where she was also involved in Christian Mothers.She is survived by her husband Werner Eibensteiner, Albany; her children Werner (Marilyn) Eibensteiner Jr., Maple Grove; Gordon (Janice) Eibensteiner, Slayton; Jeanne (Allen) Stangler, Albany; Lonny “Butch” (Audrey) Eibensteiner, Lino Lakes; Dale (Brenda) Eibensteiner, St. Joseph; Jim (Marla) Eibensteiner, Elk River; Lu (Joe) Rademacher, New Munich; Shelly (Russ) Rooney, Belgrade; Susan (Whit) Bagley, Greer, S.C.; her 29 grandchildren, and 21 great-grandchildren; and her sister Delores Tamm, Albany.She is preceded in death by her parents Peter and Catherine VanHeel, her brothers Walter, Leander, Ray, and Ernest VanHeel, her sisters Eleanor Weber, Marcella Schriefels, Juletta Hentges, and her grandsons Chris, Scott, and infant Russell Eibensteiner.

There will be a visitation for Lucille from 4-8PM on Tuesday, August 5th and again from 10AM until the time of the service Wednesday, August 6th once again at the church. Parish prayers will take place at 4PM and the Christian Mothers will pray the rosary later at 6PM Tuesday evening at the church.