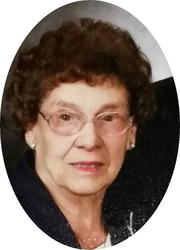 The Mass of Christian Burial, celebrating the life of Lucille Groetsch Hondl, age 95 of Albany, will be 11:00 AM, Wednesday, December 23 at the Seven Dolors Catholic Church in Albany.  Burial will be in the parish cemetery.  Lucille died Saturday at the Mother of Mercy Nursing Home in Albany with her daughter’s at her side.  There will be a visitation from 4-8:00 PM Tuesday, and again after 10:00 AM Wednesday, at the church in Albany.  Seven Dolors Parish prayers will be at 4:00 PM Tuesday at the church.  Arrangements are being made by the Miller-Carlin Funeral Homes.

Lucille was born November 25, 1920 in Albany to Tony and Susan (Kammers) Groetsch. She grew up on a farm north of Albany and she spent one year working for a family in the twin cities before marrying Alfred Habiger on June 14, 1947 in Albany, he later died January 30, 1973. After his death she moved to Albany and worked at Mother of Mercy Nursing Home and then St. John’s. She married George Hondl on September 10, 1977, he died in 2011.  She enjoyed gardening, quilting, bingo, shopping, traveling, playing cards, dancing and spending time with her family.  She was a member of the Seven Dolors Catholic Church in Albany, the Seven Dolors Christian Mothers, St Ann’s Society, the St. Jude’s Mission Group, Catholic Aid, the Albany American Legion Auxiliary, the Pioneer Club.

In lieu of flowers, memorials are preferred to the Alzheimers Association or the Albany Area Hospice.