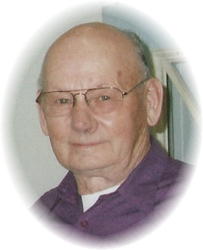 Mass of Christian Burial celebrating the life of Louis Theodore Chock, age 85 of Sobieski, formerly of Opole will be 11:00 AM Wednesday May 28, 2014 at St. Stanislaus Catholic Church in Sobieski.  Father Tim Wenzel will officiate and burial will take place in the parish cemetery following mass.  Louis passed away peacefully at the St. Otto’s Care Center in Little Falls on Saturday morning.  There will be a visitation from 4:00-8:00 PM Tuesday May 27, 2014 at the St. Stanislaus Catholic Church in Sobieski and will continue on Wednesday one hour prior to the service at the church.  Parish prayers will be at 5:30 PM and the Bowlus Legion members will pray the rosary at 7:00 PM.  Arrangements are being made with the Miller-Carlin Funeral Home of Holdingford.Louis was born on March 28, 1929 to Theodore and Mary (Fussy) Chock in Avon, MN.  He attended St. Anna Country School and later received his high school diploma while serving in the United States Army.  He was enlisted in the Army from 1952 until 1954.  He married Margaret Heinen on April 10, 1956.  Louis farmed near Sobieski from 1956-1990. He then moved to Sobieski and lived there from 1991 until 1994.  He spent the rest of his life in Opole.  His wife Margaret passed away in 1990.  He later married Lavern Broda on March 22, 1997.  Louis was self-employed as a carpenter all his life; he worked with his son Duane until he was 80 years old.Louis was a member the Knights of Columbus in Holdingford, Bowlus American Legion Post #642 as well as the VFW’s in Holdingford and Little Falls.  He is also a member of the St. Stanislaus Catholic Church in Sobieski.Louis enjoyed the outdoors especially fishing and gardening.  He played the concertina and he liked to polka and waltz.Louis is survived by his wife, Lavern; children, Joan A. (Duane) Czech, Little Falls; Debbie (George) Wippler, Little Falls; Duane (Ann) Chock, Sobieski and Kenny (Kayla) Chock, Sobieski; 9 grandchildren, Jeremy, Barney, Josh, Tiffany, Alicia, Stephanie, Allison, Michelle and Ryan; 4 step grandchildren, Beth, Aaron, Theresa and Ellie; 4 great-grandchildren; siblings, Eugene (Connie), St. Joseph; Maryann Pogatschnik, Avon; and Mary Panek, Avon.He is preceded in death by his first wife Margaret in 1990; brother, Richard (Betty) Chock, brothers-in-law, Edwin Pogatschnik and Alfred Panek and infant grandson, Eric Gosiak.

Mass of Christian Burial celebrating the life of Louis Theodore Chock, age 85 of Sobieski, formerly of Holdingford will be at 11:00 AM, Wednesday, May 28, 2014.