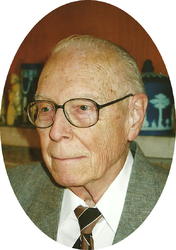 Louis Arthur Brunckhorst, age 92, died Sunday, September 11, 2011 at the Good Shepherd Community in Sauk Rapids. Arrangements are being made with the Miller-Carlin Funeral Home in St. Cloud.Louis was born September 20, 1918 in Platteville, Wisconsin to Louis A Brunckhorst, Sr and Frieda E. Brunckhorst. Louis received his bachelor’s degree from the University of Wisconsin, Platteville. Louis then attended the Marquette University School of Law and entered into the practice of law with his father and brother, Robert. Louis advanced his education throughout his life, attending ten different colleges and universities.Louis married Jeannette I. Dull on June 12, 1948. In 1950, Louis and Jeannette purchased a small town newspaper in Iowa and successfully ran the paper until he decided to follow a lifelong desire to teach. Louis taught in Iowa and Illinois before the family moved to St. Cloud in 1966, where he taught at St. Cloud State University until his retirement.Louis was preceded in death by his wife, Jeannette, parents and siblings, Robert, Frank and Winifred.Louis is survived by his son Louis (Rita) Brunckhorst III of Sartell; grandchildren, Maxwell Brunckhorst, Annabel Fish, Laura (Benjamin) Krueger, all of St. Cloud; great-grandchildren, Vaden Magestad, Samantha and Ruby Krueger.There will be no visitation or service. Private burial will be in the Brunckhorst Family Plot, Platteville, Wisconsin.

Private Burial will be in the Brunckhorst family plat in Platteville, Wisconsin