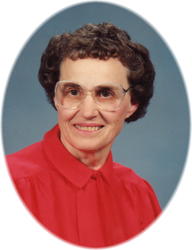 The Mass of Christian Burial, celebrating the life of Lorraine M. Euteneuer, age 89 will be 10:30 AM Thursday, October 10 at All Saints, St. Mary’s Catholic Church in Holdingford.  Burial will be in the parish cemetery.  Lorraine died Friday at the St. Benedict’s Senior Community in St. Cloud.  There will be a visitation from 4-7:00 PM Wednesday and again after 9:30 AM Thursday at the Miller-Carlin-Brenny Funeral Home in Holdingford.Lorraine was born June 30, 1924 in Holdingford to Henry and Mary (Ricker) Euteneuer.  She attended Holdingford High School.  Lorraine was employed in Minneapolis for several years before she began her employment as a priests housekeeper.  She served in Holdingford for several years before being employed by the Fr. Fred Kampsen for the next 40 years in the various parishes that he served during his priesthood in the St. Cloud Diocese.  She served as a housekeeper, cook, bookkeeper, religious education teacher and receptionist.Lorraine received the Bishops Medal of Merit in 1989 for her many years of dedicated service.  She was a member St. Mary’s Catholic Church in Holdingford, the Daughters of Isabella, Legion of  Mary and the Crosier Apostolate.Lorraine is survived by her sisters and brothers, Veronica Frie, Albany; Ceta Williams, Middleville, MI; Agnes Karpinski, Little Falls; Mary Ann Posch, St. Cloud; Clara Pylka, Chaska; Eva (Dave) Lamb, Barnesville, Victor Euteneuer, Albany; Mel (Julie) Euteneuer, Little Falls, Sister-in-law, Marie Euteneuer Rudolph. St. Cloud; and brothers-in-law, Bill Dierickx, St. Claire Shores, MI and Ambrose Fautsch, Cool Rapids.She is preceded in death by her parents, brothers, Roman, Elmer, Edwin and Urban Euteneuer; sisters, Marcella Dierickx, Erma Fautsch, and infant Leona.

The Mass of Christian Burial, celebrating the life of Lorraine M. Euteneuer, age 89 will be 10:30 AM Thursday, October 10 at All Saints, St. Marys Catholic Church in Holdingford. Burial will be in the parish cemetery.

Church of All Saints St. Mary in Holdingford

My deepest sympathies to the family. Losing a loved one is so hard. Our comforter Jehovah God assures us that he is near to those broken at heart; and those crushed in spirit he saves. (Psalm 34:18) His Word also assures us that death was never intended to be something mankind would experience. What’s even more comforting is his promise at Isaiah 26:19 where He promises us that our dead loved “ones will live again. They will awake and cry out joyfully.” May your hearts be comforted with these beautiful Scriptures in this sad time. My prayers are with you.

Sympathy to Lorraine’s family. We got to know her when she lived in Lake Henry, where Fr. Kampsen was Pastor. Truly enjoyed her, she was such a sweet person.