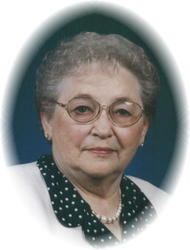 The Mass of Christian Burial, celebrating the life of Loretta Knapp, age 90 of Avon, will be 11:00
AM Saturday, October 8, at Seven Dolors Catholic Church in Albany.  Burial will be in the parish
cemetery.  There will be a visitation from 4-8:00 PM Friday and again after 10:00 AM Saturday at
the church in Albany.  Seven Dolors Parish prayers will be 4:30 PM Friday, followed by the Seven
Dolors Christian Mothers and St Ann’s Mission at 6:30 PM. At the church in Albany.
Arrangements are being made by the Miller-Carlin-Brenny Funeral Home.Loretta was born July 30, 1921 in Avon to Peter and Mary (Kalla) Klein.  She grew up in St.
Cloud and graduated from Cathedral High School.  She was working in the office of Dr. Gaida
when John Knapp came in for new glasses.  They were married in June of 1946.  Loretta worked
as his legal assistant in John’s law office in Albany before John became Chief Judge of the
Minnesota State Tax Court in 1965. She raised her four sons, Dennis, Tom, Bob and Mark in
their home in Albany.   In 1985, the couple built their retirement home on Kalla Lake, south of
Avon. She was a member of Seven Dolors Catholic Church, the Seven Dolors Christian Mothers,
the St Ann’s Mission Group, the Mother of Mercy Nursing Home Auxiliary, the Knights of
Columbus Auxiliary and the Albany American Legion Auxiliary.Loretta is survived by her sons; Dennis, Brooklyn Park; Thomas, St. Cloud and Mark, Avon.  She
is also survived by four grandchildren; Ann (Allen) O’Donnell, John (Alexia) Knapp, Robert
Knapp and Stephen (Lindsey) Knapp and one great-grandchild, Matthew Knapp.Loretta is preceded in death by her parents, her husband John in 2006, her son, Robert in January
of 2011, and her brothers, Leonard Klein and Harold Klein.Loretta was most proud of her four sons, her four grandchildren and her great-grandson.  Loretta
love her husband, her family and her life.  She will be sadly missed by her many friends who knew
her as a kind, loving person.  At the core of her life was her deep abiding faith and love of God.

Visitation will be at the Seven Dolors Catholic Chruch gathering space

The Mass of Christian Burial, celebrating the life of Loretta Knapp will be 11:00 AM Saturday, October 8, 2011.

Services will be at the Seven Dolors Catholic Church in Albany