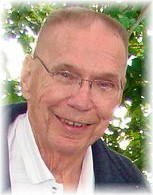 Mass of Christian burial celebrating the life of Loren Henry Bergmann, age 79 of Albany will be 11AM Saturday, December 22nd at St. Rose of Lima Catholic Church in St. Rosa.  Father Roger Klassen OSB will officiate, and burial will take place in the parish cemetery following the service.  Loren died peacefully in his sleep Sunday evening at Mother of Mercy Nursing Home in Albany. There will be a visitation for Loren from 4-8PM, Friday, December 21st at the Miller-Carlin Funeral Home in Albany, and again from 10AM until the time of the service Saturday morning at the church in St. Rosa.    Arrangements are being made with the Miller-Carlin Funeral Home of Albany.Loren was born on March 17th, 1933 to John and Hilda (Bruns) Bergmann on the family farm in St. Rosa.  He married Marcella “Sally” Blommel on May 12, 1954 at Sacred Heart Catholic Church in Freeport.  After marriage the couple moved to Minneapolis where they lived for twenty plus years before moving back to the Birch Lake area, and eventually retiring to Albany.  Loren worked his life as a machinist where he owned and operated Bergmann Machine Works and U.S. Machine.  He was a member of the Lions Club, he was a past President of the Steel Workers Union at ThermoKing, a member of the St. Joseph’s Society, and a member of the St. Rose of Lima Catholic Church.Loren is survived by his loving wife Sally Bergmann, Albany; his children John (Jayne) Bergmann, Bradenton, FL; Cindy (Jack) Sandberg, Hutchinson; Judy (John) Schulte, Eden Prairie; Gregg Bergmann, Albany; Jason (Lindsay) Bergmann, Bowlus; Lisa (Eric) Roling, Brooklyn Park; his sixteen grandchildren, and three great-grandchildren; and his siblings David Bergmann, Melrose; Duane Bergmann, Grand Rapids; Laverne (Edwin) Duclos, Big Birch Lake; Joan Haws, Little Birch Lake; Kenny (Marilyn) Bergmann, Big Birch Lake; Audrey Westbrook, Savage; and Janet Gibbons, St. Anna.He is preceded in death by his parents John and Hilda Bergmann, his siblings Irene Lee, Melvin Bergmann, Ellen Lambrecht, Darlene Schiffler, Eugene “Gene” Bergmann, and infant sister Norma Bergmann.

There will be a visitation for Loren from 4-8PM, Friday, Decmeber 21st at the Miller-Carlin Funeral Home in Albany, and again from 10AM until the time of the service Saturday morning at the church in St. Rosa.

We are so sorry to hear about Loren’s passing. Our thoughts and prayers are with your family as you heal from this sad loss. God bless all of you and may your memories bring you comfort during this difficult time.

He was my Godfather and truly a blessing in my life. I have fond childhood memories of him sneaking me $10 on my birthday when my Mom wasn’t looking. And throughout my life, whenever we were at the same event he always made a special trip over to see how I was doing. I will miss him. Jay

Rest in Peace, Lorie. You will truly be missed by those who have loved you so much through the years

To the family of Loran,
We send our deepest sympathy to you all. We have such fond memories with Lorie at his goose pits near Milan. How we miss those great times!!
Don and Joan

I’ll miss seeing my big cousin at family gatherings,farewell and we will meet again,blessings to the family, in spirit I’m with you, Love SueO

Peace and Blessings to all of the Bergmanns. Loren/Dad we know that you are are watching from above, and delivering those one liners to a new audience. Say hi to Harmon!
God Bless you. We miss you and love you dearly

Our thoughts and prayers are with you during this time. May you find comfort as you recall the many memories made with him over the years.

Andrew Newton and Family
(Friends of Jason and Lindsay)