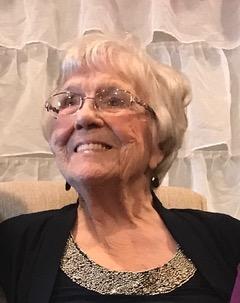 A memorial service will be at 12PM Friday, October 18th, 2019, with visitation one half hour prior at St Benedict’s Senior Community Chapel, Saint Cloud for Lila M. Fossen who passed away on Sunday October 13th at Saint Benedict’s Long Term Care.

Father Stephen Beauclair will officiate; interment will be at a later date at the Minnesota State Veterans Cemetery, Little Falls, MN where she will join her husband Roger.

Lila was born on October 6. 1927, to Margaret (Fornwald) and James O’Brien in St. Xavier, Montana.  The youngest of 13 children, Lila grew up in St. Xavier, Montana and attended country school. In high school she moved with her family to Thermopolis, Wyoming where she graduated in 1946.  In 1950 she moved to Seattle, Washington.  Shortly after arriving she met and married the love of her life, a sailor named Roger Fossen.  Roger passed away on December 20, 2008, after 58 years of marriage.

Lila made friends very easily and through the years had many friendships wherever they lived.  Lila was a hard worker all of her life and retired from her final and favorite job as elementary school librarian in Beardsley, MN.  She enjoyed bingo, the casino, camping, fishing and cooking and baking for her family and friends. She loved all the many friends she made at Benedict Village and also in long term care at St. Bens.  Lila loved family get togethers and would never turn down a chance to be with family.

She was preceded in death by her parents, husband Roger, infant daughter, Sally, 6 sisters and 5 brothers.

A gathering of family and friends will take place on Friday, October 18. 2019, at 11:30 AM, at St. Benedict’s Senior Community Chapel

A memorial service will be at 12PM Friday, October 18th, 2019, with visitation one half hour prior at St Benedict’s Senior Community Chapel, Saint Cloud