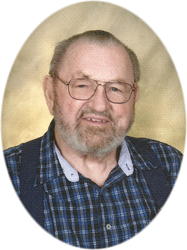 The Mass of Christian burial, celebrating the life of Leroy A. Winkler, age 85 of Holdingford, will be 10:30 AM Saturday, February, 25 at St. Mary’s Catholic Church in Holdingford.  Burial will be in the parish cemetery.  Leroy died at his home on Wednesday.  There will be a visitation from 4-8:00 PM Friday and again after 9:30 AM Saturday at the Miller-Carlin-Brenny Funeral Home in Holdingford.  St. Mary’s parish prayers will be at 6:30 PM and the Holdingford American Legion will pray at 7:30 PM at the funeral home in Holdingford.Leroy was born June 3, 1926 in Holdingford to Rudolph and Helen (Fischer) Winkler.  He spent most of his life in Holdingford with the exception of a short time during WWII when he served his country in the U.S. Army.  He married Louise Solinger on September 5, 1955 in St. Mary’s Catholic Church in Holdingford.  Leroy worked as a correction officer at the St. Cloud Correctional facility for men until he retired in July of 1981.  He was a member of the St. Mary’s Catholic Church, the Holdingford Legion and the VFW club.Leroy is survived by his wife, Louise, Holdingford; his children, Lee Winkler, Holdingford; Tim (Connie) Winkler, Rangely, CO; Kimberly (Steve) Ebnet, Holdingford and Jim (Deb) Winkler, Milaca. He is also survived by his sister, Vera Warzecha, Big lake; 9 grandchildren and 4 great-grandchildren.He is preceded in death by his parents and his brothers and sister, Leo Winkler, Lester Winkler, Alex Winkler, Irvin Winkler and Rosemary Popp.

There will be a visitation from 4-8:00 PM Friday and again after 9:30 AM Saturday at the Miller-Carlin-Brenny Funeral Home in Holdingford. St. Marys parish prayers will be at 6:30 PM and the Holdingford American Legion will pray at 7:30 PM at the funeral home in Holdingford.

I am sorry to hear of Leroy’s passing. I had the distinct privilege of caring for him for several years when I was in St. Cloud. I was always inspired by his wit, smile, and especially by his gentle approach to the world. I know he is missed. My thoughts and prayers go out to his family.
Gregory F. McAuliffe, M.D.

Our love to Aunt Louise, Lee, Tim and Kim..we just heard this morning. I have so many great memories of Uncle Leroy. Even tho our lives and times separated us, you are in our hearts and thoughts.
Love you all,
Steve Susan and Ashley