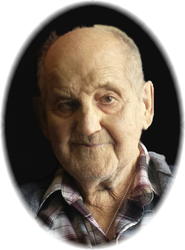 A Memorial Service celebrating the life of Lawrence Logeais, age 87, of St. Cloud, formerly of Roseville, will be at 11:00 AM on Saturday, December 12, 2015 at the Miller-Carlin Funeral Chapel, St. Cloud.  Pastor Janine Olson will officiate, a luncheon will follow, and burial will be at NorthStar Cemetery, St. Cloud.  Lawrence passed away early Tuesday morning at the St. Benedict’s Short Stay after a brief illness.  There will be a visitation one hour before services Saturday morning at the funeral home.

Lawrence was born on Feb. 12, 1928 to Charles and Josephine (Brun) Logeais in Annandale and grew up alongside three brothers.  He spent four years with the United States Air Force in the mid-40s.  On May 20, 1950, he married Evelyn Scheid in St. Cloud.  Their marriage welcomed one daughter and this young family lived in Roseville.  Lawrence was an avid outdoorsman and a John Deere man through-and-through.  He loved spending time on the family’s century farm in Annandale.  Lawrence enjoyed hunting when he was younger and fishing was a favorite pastime.  He was an expert electronic solitaire player.  Lawrence worked as a delivery truck driver with Northwestern Drug for 38 years until his retirement in 1993.  He later moved to St. Cloud in 2008 to be closer to family.  Lawrence was a member of Holy Cross Lutheran Church, St. Cloud.

He is preceded in death by his wife Evelyn, his parents Charles and Josephine, and his brothers Leonard, Merle, and Adlor Logeais.

There will be a visitation one hour before services Saturday morning at the funeral home.