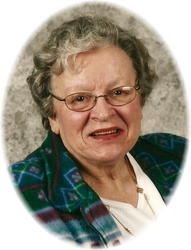 Mass of Christian burial for Lavina E. Wandersee, age 87 of Cold Spring will be Friday, November  12, 2010 at 10:00 AM at Assumption Nursing Home Chapel in Cold Spring.  Father Julius Boeckermann will officiate, and burial will take place at Calvary Cemetery in Mankato.  Friends may call from 5-8 PM on Thursday, November 11, 2010 at the Miller-Carlin Funeral Home in Holdingford and again from 9AM until the time of the service on Friday at the Assumption Nursing Home.  Arrangements are being made with the Miller-Carlin Funeral Home in Holdingford.Lavina was born on December 27, 1922 to John and Bessie (Fiala) Golitko in Jackson, MN.  She married Marvin Wandersee on June 5, 1943 in Texas.  After marriage, they lived in Texas until the war was over and then moved back to Minnesota.  They lived in Kasota, Mankato, Montgomery, and New Prague before purchasing a farm in the Holdingford area.  Since 1999, Lavina has resided in Cold Spring at the Assumption Campus.  Lavina was a loving homemaker and mother.  She was a member of the Christian Mothers, the Holdingford Legion Auxillary, and Saint Mary’s Catholic Church in Holdingford.Lavina is survived by her children John (Barbara) Wandersee, Pensacola, FL; Paul Wandersee, MacGregor; Judy (Jim) Slinkard, New Prague; Trish (Paul) Gannon, St. Joseph; Dave (Marilyn) Wandersee, Council Bluffs, IA; Dan Wandersee, Maple Lake; Tony (Debra Kellerman) Wandersee, Oak Island, Lake of the Woods; Monica (Brian) Maine, Avon; Mark (Tracy) Wandersee, Oconomowoc, WI; her 31 grandchildren, and 25 great-grandchildren.  She is also survived by her sisters, Mary Lou (Jim) Burdulis, Seattle, WA; and Bernice Wilson, Seattle, WA.She is preceded in death by her husband Marvin who passed away on November 26, 2002 and her daughter Charlotte Granite

Friends may call from 5-8 PM on Thursday, November 11, 2010 at the Miller-Carlin Funeral Home in Holdingford and again from 9AM until the time of the service on Friday at the Assumption Nursing Home. Christian Mothers will pray at 7, followed by Parish Prayers at 7:30 at the funeral home.

Our condolences go out to the Family and our prayers are with you. May God keep you in His Everloving arms.

To all the Wandersee Family,
Though we can not be there with you, our hearts are with you all as you mourn the loss of Your Mother, Grandmother, Great-Grandmother, Sister and my Dear Aunt. She will always be in our memories, and forever in our prayers.
Our deepest sympathy is with you all.

Wandersee Family
I will always treasure the memories of your mon and dad.
We had so much fun coming to the farm and going fishing and playing games.
You are all in our thoughts and prayers.

Wandersee Cousins
My sincere sympathy to you all. I will always remember the times we got togeater both at New Prague and at the farm.

Monica and Brian,
We are thinking of you. May your fond memories help you through this difficult time.

Wandersee Family
I will always remember the family reunions and the times we had together! Lavina was always going out of her way to make sure everybody was well taken care of – she put everybody elses needs before her own. What a kind, caring, and loving women she was – she will be missed by many. My heart goes out to each of you at such a difficult time – I’m so sorry!!! May your own hearts be eased from the pain and sorrow with the cherished memories you have of such a wonderful women!!!