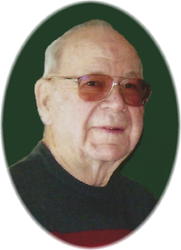 A Memorial Service celebrating the life of Kenneth J. Yilek, 88, of St. Cloud, will be at 11:00 AM on Saturday, March 7, 2015 at the Country Manor Chapel in Sartell.  Chaplain Adam Sohr will officiate.  Kenneth passed away peacefully in his sleep at the Country Manor Nursing Home early Tuesday morning on February 17th.  There will be a visitation for friends and family after 10:00 AM until the time of the service Saturday morning at Country Manor.  Arrangements are being made with Miller-Carlin Funeral Home, Saint Cloud.

Kenneth was born on June 11, 1926 to Joseph and Clara (Hanson) Yilek in Sauk Rapids.  He grew up with two brothers in Big Stone City, SD and Sauk Rapids.  After graduating high school, Kenneth joined the U.S. Navy and served his country proudly.  On July 8, 1950, he married Patricia Conley at the First United Methodist Church in St. Cloud and together they raised three children.  Kenneth loved working with the customers he met over his 35 years in Sales and Delivery at Auto Value.  He seemed to keep all the parts information in his head and could answer most questions.  Everybody loved Kenny and he helped everybody.  He was known as a “Mr. Fit It” and always said that anything could be fixed.  Kenneth loved the outdoors, especially camping with his wife and kids, pheasant hunting, snowmobiling to Brainerd, and fishing.  He loved spending time with his family,  and going out to eat with his wife or taking rides.  He was also a wonderful father, and a terrific grandpa.  Kenneth also had a soft spot for animals, like the family cat they had for 20 years, and the dogs they had over the years.  Sports were his life, especially the MN Twins, which were best enjoyed with an ice cold beer.  Kenneth played softball for National Bushing twice a week and was in the Over-60 league with the Legion.  He was active with the American Legion Post #234 in Sauk Rapids and was past President.  He could go with the flow easily and has touched many lives.  He will be fondly remembered and never forgotten.

He is preceded by his wife of 56 years, Patricia, who died in November of 2006, his son Todd Yilek, and his brothers and sisters-in-law Martin (Janice) Yilek and Carl (Pat) Yilek.

There will be a visitation for friends and family after 10:00 AM until the time of the service Saturday, March 7, 2015.

So sorry to hear of your father & grandfathers passing. Our thoughts are with you all. Hugs, Kelly & Paul

I fondly remember Kenny delivering parts to my Fathers gas station in Watkins in the 1950’s and 1960’s, he was always fun to visit with and had a terrific memory, a a number of years ago, my mother was a resident at Country Manor, I saw Kenny and he remembered me.  One of the nicest men I have ever had the pleasure of meeting!