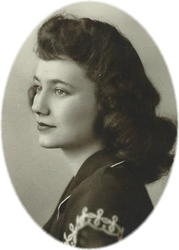 Services celebrating the life of June Bernice Utley, 86, of St. Cloud will be at 11:00 AM on Friday, September 26, 2014 at the Miller-Carlin Funeral Home Chapel in St. Cloud.  Chaplain Gregg Valentine will officiate and burial will take place at Camp Ripley in Little Falls at 3:00 PM.  June passed away early Sunday morning with family at her side.  There will be a visitation after 10:00 AM until the time of service on Friday.  Arrangements are being made with Miller-Carlin Funeral Home in St. Cloud.

June was born on February 17, 1928 to William “Ray” and Ruth (Birkeland) Wilkes in Minneapolis.  She grew up in Minnesota with six siblings and travelled with her family to Alaska as a part of a relocation program.  Her father, a state game warden and one of the first in MN, brought the family back to MN where she attended school in Federal Dam and graduated from Bagley High School.  June married Alvin “Dude” Olson and together they had three children Barb, Becky and Bill.  June had a huge, soft heart beneath a tough exterior.  Her larger-than-life personality led to her magical relationship and second marriage to Morgan Utley and included three stepchildren John, Kathy, and Jerry.  June spent time working as a credit union manager, worked for the Job Corps, was involved with rental property management, and worked in a yarn shop.  An adventurous spirit who was young at heart, June loved to travel with Morgan.  She enjoyed going to the casino, and was a cribbage fanatic.  June was story-teller and the family historian.  She loved a good joke – telling them or pulling pranks.  June liked to knit, embroider, teach others those skills, spend time fishing, or playing cards.  She was a member of the Eagle’s Auxiliary and Legion Auxiliary in Brainerd.

She is preceded in death by her parents Ray and Ruth, her husband Morgan in 2008, her daughter Barbara Mahoney in 2014, her brothers Max Wilkes and Norman Wilkes, and her grandson Brendan Mahoney in 2011.