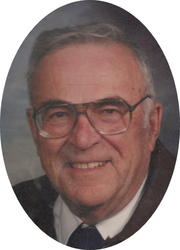 The Mass of Christian Burial, celebrating the life of Joseph “Joe” Jovanovich, age 91 of Sauk Rapids, will be 11:00 AM Wednesday, February 1 at St. Patrick’s Catholic Church, 7286 Duelm Road NE Sauk Rapids.  Burial will be in the parish cemetery.  Joe died Sunday at the St. Cloud Veterans Affairs Medical Center.  There will be a visitation from 4-8:00 PM Tuesday and again after 9:00 AM Wednesday at the Miller-Carlin Funeral  Home in St. Cloud.   Knights of Columbus Council 961 will pray  at 6:00 PM Tuesday at the funeral home in St. Cloud.Joe was born January 18, 1921 in Aurora MN to Steven and Eda (Starcevich) Jovanovich.  He grew up in Keewatin and entered the U.S. Army, serving during WWII.  After his discharge, he studied at, and graduated from the University of Minnesota and he began is career teaching agricultural to veterans in the Little Falls area.  Joe married Carol Adams on November 3, 1962 in Rockville.  Joe started working for the Production Credit Association where he became Vice-President in charge of providing loans to farmers.  Joe and Carol moved their family to Sauk Rapids in 1967, where they have lived since.  Joe was a member of St Augustine’s Catholic Church and the Knights of Columbus Council 961.Joe is survived by his wife, Carol, Sauk Rapids; his sons, John (Jodi) Jovanovich, Greenfield; Jim (Kimberly) Jovanovich, Las Vegas; Jeff (Kelly) Jovanovich, Gilman; Jerry (Debra) Jovanovich, Golden Valley; and five grandchildren.He is preceded in death by his parents, his son, Joseph Jovanovich, Jr. “Chip”;  his brothers, Steven Jovanovich Jr. and John Jovanovich.

Visitation will be at the Miller-Carlin Funeral Home in St. Cloud