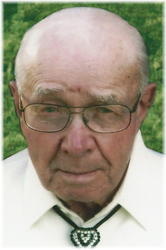 Mass of Christian burial celebrating the life of Joseph Ben Poepping, age 91 of Sauk Centre  (formerly of New Munich) will take place at 11AM Tuesday, June 24, 2014 at Immaculate Conception Catholic Church in New Munich.  Father Roger Klassen OSB will officiate, Father Greg Paffel will concelebrate, and burial will take place in the parish cemetery following the mass.  Joseph died peacefully in Sauk Centre early Friday morning surrounded by his family.  There will be a visitation for Joseph from 5-8PM Monday, June 23rd at Immaculate Conception Church and again from 10AM until the time of the service Tuesday morning at the church in New Munich.  Parish prayers will take place at 6PM Monday evening at the church.  Arrangements are being made with the Miller-Carlin Funeral Home of Albany.Joseph was born September 18, 1922 to Henry and Ida (Lueken) Poepping in St. Martin Township.  He grew up in a farm family who farmed in many locations around Central Minnesota.  He married Mildred Evens on September 26, 1945 in Farming.  After marriage, the couple moved to Raymond where he worked on a farm.  Soon after, Joe went to work for Jenny-O in Melrose until he eventually purchased the Melrose Locker Plant which he owned and operated for many years.  Besides the meat locker, Joe stayed true to his farming roots raising pigs, chickens, and horses on his farm in New Munich.  Besides work, Joe and his wife loved to square dance.  They also greatly enjoyed playing cards with friends and neighbors over the years.  They also loved going out to eat.  Joe and the family could always be found at Charlie’s on Tuesdays for Buck Night.  Joe was a member of the St. Joseph’s Society, Catholic Aid, a former Lion’s Club member, a former New Munich City Council Member, and an active member of Immaculate Conception Catholic Church in New Munich.Joe is survived by his loving wife of 69 years Mildred Poepping, Sauk Centre; his children Darleen, Albany; Allen Poepping, New Munich; LeRoy Poepping, Milaca; Eugene (Amy) Poepping, Sauk Centre; his daughter in law Carrie Poepping, New Munich; his fifteen grandchildren and 11 great-grandchildren; and his siblings Bernidine Ramler, Richmond; Betty (Sylvester) Theis, Cold Spring; and Alfred (June) Poepping, St. Cloud.He is preceded in death by his parents Henry and Ida Poepping, his sons Wilfred “Butch” Poepping who died in Vietnam in in1971, and Marvin Poepping who passed in 2011, his brothers Frank, Norbert, Jerome, and Ralph Poepping, and his sister Marie Thomes.

There will be a visitation for Joseph from 5-8PM Monday, June 23rd at Immaculate Conception Church and again from 10AM until the time of the service Tuesday morning at the church in New Munich. Parish prayers will take place at 6PM Monday evening at the church.

My condolences to all the family with the loss of Joe; he was a good man and a great uncle and will be missed. You will all be in my thoughts and prayers during this trying time.