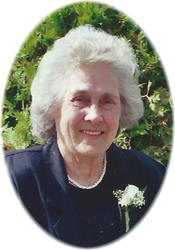 Jonnie was born on September 21, 1933 to Wilson and Lena (Cole) McWilliams in Pelahatchie, MS.  At 6 months old, her mother passed away, and she was raised by her grandparents Robert and Florence Cole.  Jonnie grew up with two full siblings and also 11 of her aunts and uncles as “adopted siblings.”  As a child, she attended Southern Baptist churches and shared her beautiful voice in a gospel quartet with her brothers.  Jonnie was a tomboy, quite athletic, and in high school, she was a basketball star.  Her love of sports would continue throughout her life.  After she graduated from Magee High School in Magee, MS, she traveled to Holdingford visiting family.  Six months later, on Nov. 8, 1954, Jonnie wed Andrew Konsor in Glyndon, MN and made a life with him in Holdingford and together they raised five children.  She was one of the first women hired in 1966 to work the assembly line at Franklin Manufacturing/Frigidaire and retired after 30 years.  Jonnie was an avid sports fan and loved watching sports on TV.  Her family fondly recalls how she would hoard the remote to ensure her beloved sports were on.  Jonnie was always a little pistol and enjoyed poking fun at folks, especially Andy!  She also enjoyed reading, doing word puzzles, taking walks, and growing flowers in her garden.  Jonnie was affiliated with one of the founding families of the South Elmdale Congregational Church.

A special thank you to Hyatt House and staff for the care for Jonnie, to her roommate and dear friend Theresa Kruse, as well as Shirley Konsor.

Services will be at 11:00 AM Tuesday, August 16, 2016 at the Miller-Carlin Funeral Home in Holdingford. Pastor Gregg Valentine will officiate, followed by burial at the South Elmdale Cemetery and then a luncheon at the Community Country Church in Holdingford.

Praying for all, God bless each of you.So sorry to hear of Jonnie passing.

So sad to hear about Jonnie passing.  I know she is in a better place- united with so many of her loved ones.  I loved our long talks and she will be greatly missed.   Love you, Jonnie!