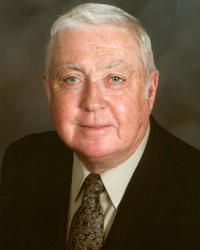 Mass of Christian Burial, celebrating the life of John T. Lorch, age 71 of Clearwater, will be 11:00 AM Thursday, July 5, at St. Luke’s Catholic Church in Clearwater. Burial will be in the St. John’s Parish Cemetery in Darwin, MN. John died peacefully, Friday at the Quiet Oaks Hospice House. There will be a visitation after 9:30 AM on Thursday at the church in Clearwater. Arrangements are being made by the Miller-Carlin Funeral Home , St. Cloud.John was born September 30, 1940 in Litchfield, MN to Jack and Elizabeth (Casey) Lorch. He grew up in Darwin and his family moved to Hoyt Lakes in 1956. John served in the U.S. Air Force from October of 1958 until October of 1962. He married Verlie Zelinsky in New Hradec, ND. The couple lived in Minneapolis for a short time then North Dakota before moving to Hoyt Lakes in 1966. John was a Master Plumber for LTV Steel, formerly Erie Mining Company. He retired in 2000 after 33 ½ years with the company. John and Verlie moved to Clearwater in 2005. He was a member of the St. Luke’s Catholic Church in Clearwater, the American Legion and the Steel Workers Union.John is survived by his wife, Verlie, Clearwater; children, James Lorch, Andover; Kelley (Mark) Yaeger, Ham Lake; Nancy Marrs, Waconia; Daniel (Jen) Lorch, Erie, CO; brothers and sisters, Richard (Kathy) Lorch, Alexandria; Mary (Sheldon) Olson, Spencer, IA; Peg Lorch, Coon Rapids; Tom (Sue) Lorch, New Richmond, WI; Bob (Shirley) Lorch, Fontana, CA; Barb (Dave) Scott, Aurora, MN; and eight grandchildren.John is preceded in death by his parents.Memorials preferred.

May Uncle John rest in peace. He was an excellent family man and was always a joy to be around. Remembering him telling stories, having a glass of Brandy, and playing golf. Our thoughts and prayers are with the Lorch family, especially Verlie. We love you!

To the entire family please know you are in our prayers. Our family enjoyed getting to know John and he was always so kind and caring. We pray you feel the power of prayer during this time and the comfort it can provide. Love, Matt, Lori, Emily, Chloe and Graham Jaeger

Our prayers have been steady and ongoing for the Lorch family. God Bless.

Verlie and Family
Our prayers continue for all the family. Stay strong in faith and Gods Blessing to you.

May God Bless all of you with Peace and Love, we are praying for all of you and Love you loads.

Lots of memories of the twinkle in his beautiful blue eyes. Thinking about all of you…

I knew John back in Darwin and he played a part in a lot of good memories. Your family is in our prayers.

Our thought’s and prayers are with you.
God bless you

I knew John from Litchfield High School and all the Darwin connections, Twine Ball Days!. We missed John when he moved away from Litchfield before graduation but I was so happy when he came back to our 50th reunion. John was a wonderful caring individual and our prayers are with his family! God Bless.

John & I were in the same grade, starting in Darwin until he moved in 1956. He was always a very nice guy and had a wonderful family too. My love and sympathy to the Lorch family. He will certainly be missed!