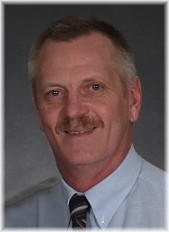 Huntz was born March 8, 1957 to Roman and Lucille (Klocker) Klein in St. Cloud.  He was raised with nine siblings, graduated from Apollo High School, and attended St. Cloud Vo-Tech.  On January 14, 1989 Huntz married Sharon “Sherri” Lehner at St. Mary’s Church in Holdingford and they had five children.  He was an avid sports fan, enjoyed baseball, football, hockey, and softball.  Huntz supported his children and all the kids in the family in their sports by attending games, coaching baseball, basketball, and softball.  He played softball for years for Sal’s Bar and enjoyed a few championship wins.  Huntz loved spending time on the family farm and outdoors.  He liked to deer hunt, fish, and garden.  He would spend hours tending and caring for what he grew, such as flowers, vegetables, fruits, and his apple trees.  Huntz especially loved spruce and pine trees, which he planted as seedlings over 20 years ago and have grown to great heights.  He worked at Columbia Gear for 22 years as a machinist.  He was talented at what he did and even made his own wood bats on his wood lathe at home.  Huntz enjoyed artistic wood-burning and painted a set of ceramic figures gifted to him.  He designed, drafted, and built their family home and later helped many other family members build their homes.  Huntz enjoyed a good card game, especially cribbage, 500, and poker.  He was a man of deep faith who was humble, gentle, loving, and giving.  In his 20s, Huntz worked as a Youth Leader in his church and he continued to share his faith with his children and family.  He was a lifelong member of St. John the Baptist Catholic Church in Collegeville.

Huntz will be greatly missed by all whose lives were brightened by his kind spirit.

So sorry for your loss.  Prayers to all of you!

Our thoughts and prayers are with John’s family during this difficult time.  We are so very sorry for your loss.