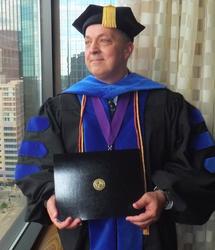 The Mass of Christian Burial celebrating the life of John Howard Binsfeld, age 62, of Holdingford, will be at 11:00 AM, Monday, December 14 at the Church of All Saints-St. Hedwig.  Father Greg Mastey will preside.  Burial will be in the St. Hedwig’s Cemetery.  John died at home surrounded by his family, after a 3 1/2 year battle with stage 4 cancer.  There will be a visitation on Sunday, December 13th from 4:00 to 8:00 PM and again after 10:00 AM Monday morning at the Church of All Saints-St. Hedwig.  Arrangements are being made with Miller-Carlin Funeral Homes, Holdingford.

John was born August 6, 1953, in Groton, Connecticut at a Naval Submarine Base Hospital to Arthur and Marjorie (Fernandez) Binsfeld.  John grew up in a Naval military family, living in various areas of the United States including Connecticut, Brooklyn, NY, Key West, FL and Milwaukee, WI.  John was a 1971 graduate of Holdingford High School.  He spent much of his teen years helping at his family’s restaurants in Holdingford and Bowlus.  After graduation John worked in many capacities managing restaurants, working in the offices at Polar Manufacturing, as a security guard and in the dairy industries.  John was a member of the Merchant Marine on the ship “Charles M. Beagley” in 1974 and 1975.  He married Deborah (Czech) Binsfeld on April 5, 1975 at St. Hedwig’s Church in Holdingford.

In 1982, John entered St. Cloud State University at the age of 29.  He received his Bachelor of Arts degree in Political Science in 1989.  Ten years later John graduated with a Master’s Degree in Information Resources/Human Resources from St. Cloud State University.  John then worked at the St. CLoud Technical College, as a Reference Librarian and a Project Manager in partnership with the St. Cloud Technical College Transportation Faculty, which lead to a MNGREAT Award in 1999.  From 1999-2001 John worked at Winona State University as a TeachNet Manager.  In 2004-2005, John worked as an AMERICORP VISTA volunteer, working with Holdingford Helping Hands and was instrumental in setting up the Rural Stearns Faith in Action Program, which he also served as a board member for many years.

In 2006, John began his doctorate in Psychology, and as a psychology student began teaching as an adjunct faculty at the Minnesota School of Business. In 2010 became an online professor at Upper Iowa University.  John finished his doctoral dissertation on September 12, 2012, and graduated from Capella University, with a PH.D in Philosophy of Psychology in August, 2013.  John taught at Upper Iowa until October 2015, when his cancer didn’t allow him to teach any longer.

John was a member of the church of All Saints-St. Hedwig’s, the American Psychological Association, and for many years a member of the Holdingford Commercial Club as a main street business owner.  As a local entrepreneur John’s businesses included Gifties-N -Goodies, IR-IS Productions, Binsfeld Gallery and rental units.

John had a passion for painting, especially charcoals, which he began at a very young age.  John’s greatest loves were teaching, music, (playing instruments and singing) as well as reading, building and designing things, but most of all spending time with his children and grandson.

John’s greatest love were for God, Family, Education and Community.

There will be a visitation on Sunday, December 13th from 4:00 to 8:00 PMand again after 10:00 AM Monday morning at the Church of All Saints-St. Hedwig.

The Mass of Christian Burial will be at 11:00 AM, Monday, December 14 at the Church of All Saints-St. Hedwig. Father Greg Mastey will preside. Burial will be in the St. Hedwig’s Cemetery.

My sincere condolences to you ! John was such a breathe of fresh air to take care of everytime he came in to OPS !! I have been thinking alot about him lately and now know he has moved on to his “classroom in the sky ” May your memories provide some laughter

John was a wonderful,greatful and gracious customer of mine at Kays. Always so polite. It was a pleasure to know him and his wonderful  wife, son and daughter.

My prayers are with you during this difficult time. God Bless you!

“One day, the butterfly will tire of flying. The nights will grow too cold for him and life as a butterfly will end. At that time, he will return to Mother Earth and nourish new life. But all dying means is change.” (The Great Change)

John, always full of the joy of life, never met a person he didn’t know. I’ll remember John’s probing questions (he was on a lifelong quest), his wide smile and firm handshake. My thoughts are with you.

I am so sorry to hear of the loss of your husband John.  May you be comforted by his memory, and the blessings of family close at hand.   My sincere condolences, at this holiday season.