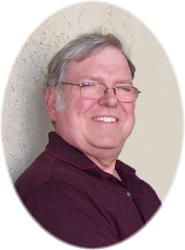 Memorial Services celebrating the life of John C. Folkestad, age 62 of St Cloud will be 11AM Monday, November 8, 2010 at Grace United Methodist Church in Saint Cloud.  Pastor John Praetorius will officiate, and burial will take place at the Minnesota State Veterans Cemetery at a later date.  John died peacefully Thursday morning in his home surrounded by his family after a long struggle with Melanoma.  Friends may from 4-8 PM on Sunday, November 7, 2010 at the Miller-Carlin Funeral Home in St Cloud.  There will be a time for sharing at 7 PM.  There will also be a visitation from 10 AM until the time of the service at Grace United Methodist Church in St. Cloud.  Arrangements are being made with the Miller-Carlin Funeral Home in St. Cloud.John was born April 24, 1948 in Minneapolis to Charles and Carol (Henderson) Folkestad.  John enlisted in the Air Force from 1971-1974 where he spent his time in Italy.  He earned his bachelor’s degree in history from St. Cloud State University prior to his time in the service.  John married Diane Berthiaume in 1978.  They had two children together, and later divorced.  He later married Lois Gwynn on June 29, 2003 in St. Cloud MN.  John worked for the State of Minnesota in the Department of Management and Budget for over 27 years.  He was a member of the St. Cloud Eagles, the St Cloud Legion, and Grace United Methodist Church in St. Cloud.John is survived by his wife Lois Gwynn, St, Cloud; his children Amanda Folkestad, St. Cloud; Joel (Heather) Folkestad, St. Cloud; his step-children Kristina (David) Gwynn Dobler, and their four children Anchorage AK; Wade (Crystal) Gwynn, St. Cloud; Nick (Jamie) Gwynn, St. Cloud; his mother Carol Folkestad, Sun City, AZ; his brothers, Alan (Margie) Folkestad, Denver, CO; and Steve Folkestad, Sun City, AZ.He is preceded in death by his father Charles Folkestad.

Dear Lois & family-
So sorry to hear about the loss of your beloved John!! May he rest in peace and your memories help you through this difficult time. Sending my thoughts and prayers!
Love-Karen Wilkes-Nudell

John and I always had a nice conversation each morning while he was cleaning the 60 cup coffee maker.
Great guy with a great smile!!

I’ve had many occasions since I met John in the early 1980’s to talk to him and bring him questions about work matters from several different state agencies that I worked in. He was steady and knowledgable, and always pleasant and kind. He had a load of experience, and was always there with the right answer. John was a great guy, and it won’t be the same without him.

I enjoyed getting to know John over the years here at MMB. John was a great source of knowledge about the State’s accounting system, and was always happy to share his insights when I looked to him for answers. I always enjoyed getting to visit with him, and I will miss seeing him and his friendly smile. John lives on as an inspiration in my memories of him and his courage, and always-positive attitude in the face of great challenge.

Thanks, Folkestad family, for sharing John with us.

Lois & family,
Our thoughts & prayers are with you as you mourn the loss fo John. May your memories hold you up as you go through this difficult time.
The Klopps