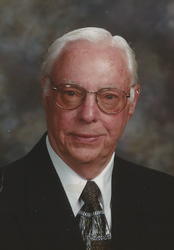 Services celebrating the life of John Reid Barron, age 87 of Sartell, will be 11:00 AM, Saturday, August 13 at the First United Methodist Church in Sartell.  Burial will be in Acacia Cemetery in Clearwater.  John died Tuesday at the St. Cloud V.A. Medical Center in St. Cloud.  There will be a visitation from 4:00-8:00 PM Friday at the Miller-Carlin Funeral Home in St. Cloud and again after 10:00 AM Saturday at the church in Sartell.

John was born January 25, 1929 in South St. Paul to Alexander and Isabelle (Thomson) Barron. After graduating high school from Watertown, SD, he enrolled at Macalester College and served in the Navy Reserve. He was called into active duty in 1951 during the Korean Conflict. After being honorably discharged,  he attended St. Cloud State University where he earned a bachelor’s degree in Industrial Arts.  He married Lois Stewart on December 18, 1954 in Clearwater. The couple lived in St. Paul and then they moved to Granite Falls in 1965.  John taught Mechanical Technical Drafting at the Granite Falls Area Vocational Technical Institute.  The family moved to St. Cloud in 1974, and John worked as a Design Draftsman for Qualitone, Inc., commuting to St. Louis Park for eleven years.  John also worked with the Miller-Carlin Funeral Homes.  He was a member of the First United Methodist Church, Waite Park American Legion Post 428, and the St. Cloud Fun Singers.  He was a former member of the St. Cloud Eagles Aerie 626, Boy Scouts of St. Cloud and Granite Falls, Civil Air Patrol in St. Paul and St. Cloud, and the rescue squad in Granite Falls.

He is preceded in death by his parents, his son, Paul Barron and his brother, Alexander “Monty” Barron, Jr.

There will be a visitation from 4:00-8:00 PM Friday at the Miller-Carlin Funeral Home in St. Cloud and again after 10:00 AM Saturday at the First United Methodist Church in Sartell.

Services will be 11:00 AM, Saturday, August 13 at the First United Methodist Church in Sartell.

Lois and family.. My sympathies to you all. John was a wonderful man. JOYCE WEHLAGE