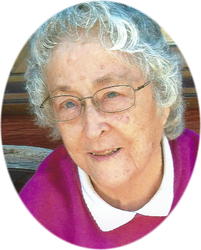 Paul and the families of Paul and Joan Buttweiler wish to inform their friends and colleagues of the death of Joan, at home on Thursday, June 19, 2014, due to Pancreatic Cancer.The Mass of Christian Burial, celebrating the life of Joan Buttweiler, age 84, of St. Cloud, will be 10:00 AM, Friday, June 27th at St. Mary’s Cathedral Lower Church in St. Cloud.  Burial will be at a later date.  Friends may gather after 9:00 AM Friday at the church in St. Cloud.  Arrangements are being made by the Miller-Carlin Funeral Home in St. CloudJoan was born January 13, 1930 in St. Cloud to Ray and Helen (Reider) Harry.  She attended St. Mary’s grade school and graduated from Tech High School in 1947.  She worked for Harry’s Portrait Studio and other studios as an Oil Paint Portrait Colorist.  She was also employed at Northwestern Bell Telephone as an Operator and Service Assistant until she retired in 1983.Joan was united in marriage to Paul (Buzz) Buttweiler on September 8, 1951 at Saint Mary’s Cathedral in St. Cloud, MN.  They spent some time living in West St. Paul and Coleraine, MN and then, for the past 49 years, made their home in South St. Cloud.  Joan was very family oriented and enjoyed life most when she was directly involved with her children, grandchildren and great-grandchildren’s lives.  Joan was a member of St. Mary’s Cathedral, the Stearns County Historical Society, Telephone Pioneers and a Local Genealogy Group.Joan is survived by her husband of 63 years, St. Cloud; son, Mark, Sauk Rapids; daughters, Terese (Terry) Emley, St. Cloud; Lynn (Gary) Joubert, St. Cloud; grandchildren, Joseph, Gary P. and Helen Joubert, Sawyer and Devin Buttweiler, two great-grandsons and one great-granddaughter.  She is also survived by her sister, RoseAnn (Mike) Shaver, Lacrosse, WI.Joan is preceded in death by her parents and her brother, Ronald Harry.  The entire family will miss her constructive advice and physical help.  She loved working with and for her extended family.Memorials are preferred to Pancreatic Cancer, Hospice or the Poor Claires.

Memorials are preferred to Pancreatic Cancer, Hospice, or the Poor Claires.