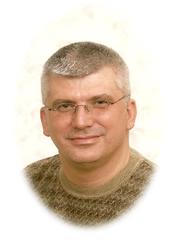 Jerome OhmannBurnsevilleOctober 3, 1963 – December 14-2009Jerome was born October 3, 1963, in Neubruecke, Rheinland-Pfalz, Germany, to Joseph and Lieselotte (Benseler) Ohmann. His father was in the military so Jerome lived several places as a child including the United States and Germany. Jerome and his family settled in Albany in 1977. Jerome graduated from Albany High School and then he graduated from the University of Minnesota with a Bachelor degree in Economics, and continued his education in Computer Science and Accounting. He has lived in Burnsville for the past 16 years and previously in Madison, Wisconsin, working as a Paralegal, then for Cypress, in Bloomington, analyzing semi-conductors.   Jerome is survived by his parents, Joe and Lottie Ohmann, Albany and his sister, Elizabeth Nordmann (Carl Zwack), Avon, nephew, Brian, niece, Melissa, Great nephew, Benjamin, and Great niece, Samantha, and his cats, Stan and Ollie. He enjoyed all that life had to offer, including sky diving, scuba, diving, and traveling, spending time in Germany, Australia and England in recent years. He also enjoyed the Minnesota Institute of the Arts, music and attending concerts. He loved to spend time with his family and friends, and will be sadly missed by all who knew him.

There will be a visitation from 1 until 2, and then again after the service from 3 until 4 on Saturday February 13th, 2010

There will be a service at the Miller-Carlin Brenny Funeral Home at 2:00 PM on Saturday February 13th, 2010

I’m very sorry to hear of Jerry’s passing. I worked with him at Cypress Semiconductor in Failure Analysis. He was a good man. You are in my prayers.