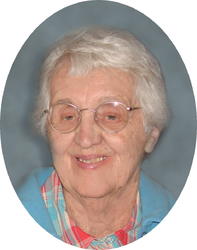 Private services celebrating the life of Jean E. Des Marais, age 90 of Albany, will be celebrated at the Minnesota State Veterans Cemetery in Little Falls.  Jean died peacefully Wednesday evening at the Mother of Mercy Assisted Living in Albany.  Arrangements are being made by the Miller-Carlin-Brenny Funeral Home in Albany.Jean was born  February 20, 1921 in St. Cloud, to Clara (Thingvold) and Alex Lux.  She grew up in St. Cloud where she graduated from Technical High School and continued her education at the St. Cloud Teachers College.  Jean married Keith Des Marais on May 28, 1943 in Sisseton, SD.  The couple moved to the Albany area where they owned the John Deere Implement Dealership until retiring in 1985.   Jean was a member of the St. Benedict’s Catholic Church in Avon and the Albany American Legion Auxiliary.Jean is survived by her daughters, Mary Jean (John) Luethmers, Albany; Karen (Sandy) Mac Intosh, Owatonna; Carol (Bob) Hallman, Brooklyn Park; her six grandchildren and eight  great-grandchildren.She is preceded in death by her husband of 67 years, Keith; her parents Alex and Clara Lux; her brothers, William and Richard Lux and an infant son, David.

All services will be private.

We love you Grandma.

Mary, Karen. and Carol,
I am really sorry to hear about your mother. I know you have a lifetime of wonderful memories, and know that it’s still hard! You have my sincerest sympathy…

Mary and family –
I’m very sorry to hear about the loss of your mother. My thoughts and prayers are with you.

Carol,
I was very sorry to hear about your loss. Please remember that sharing your memories and stories of her will keep her close.
You and your family are in my prayers and have my deepest sympathies.
JJ