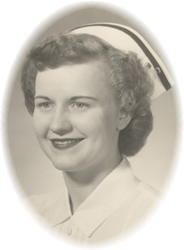 Private family funeral services celebrating the life of Janet LaMoi Nelson, age 80 of Waite Park will be 2PM, Sunday, September 16, 2012 at Salem Lutheran Church in St. Cloud.  Pastor Kristen Anderson will officiate and burial will take place at a later date.  Janet died peacefully at the St. Cloud Hospital surrounded by her family Monday afternoon.  There will be a gathering prior to the service starting at 1PM, Sunday afternoon at the church.  Arrangements are being made with the Miller-Carlin Funeral Home of St. Cloud.Janet was born July 4th, 1932 in Condi South Dakota to John and Effie Mae (Ritzman) Walton.  She lived most of her childhood in Mitchell SD, but after her marriage to Gerald Nelson on August 30, 1952 in Mitchell, moved to White Bear Lake.  She worked as a nurse her entire life.  She began her career as an RN at the Gillette Children’s Hospital; later she became the Director of Nursing at two different nursing homes, and most recently was a nurse at the Lino Lakes Correctional Facility where she worked her last 18 years before finally retiring in 1993.  After retiring, the couple travelled and moved to Mission, TX where they enjoyed their retirement before moving back to Minnesota to be close to family.  Janet was always known for having a very compassionate heart and always felt a great need to give what she could to the underprivileged. Janet is survived by her loving husband of sixty years Gerald Nelson Sr., Waite Park; her children Gerald B. (Linda) Nelson Jr., Waite Park; Jaymie (Scott) Kraker, Lakeville; Jandra (Tim) Birr, Vadnais Heights, her seven grand children, and two great-grandchildren, and her siblings, Dr. Jerry (Pat) Walton, Sioux Falls; James Walton, Mandan ND; Jonni (Dale) Olson, Phoenix; and many special nieces and nephews.She is preceded in death by her parents Effie Mae and John Walton and her beloved great-grandson Charlie Nelson.

There will be a gathering prior to the service from 1-2PM, Sunday, September 16th at Salem Lutheran Church in St. Cloud

My prayers are with my freind Jandra and all of this family. One day you will be rejoined in heaven and it will be joyful.
I am sorry for the loss of a mother, wife, friend and grandma…..no words can say enough for the sadness in my heart.

My thoughts, heart and prayers go out to the family and loved ones. Good times and great memories. I feel very blessed.

Jaymie and Jandra, Just found out about your Mom. I am so sorry ,she was a very kind lady and fun too. I think of you often and hope you are well. I wish you and your family comfort in the memories you hold in your heart. Would love to reconnect if you want.
Love,