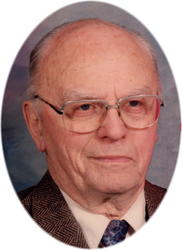 The Mass of Christian Burial, celebrating the life of James M. “Jim” Mahoney, age 98 of St. Cloud, will be 12:00 PM Thursday, December 6, 2012 at the Church of St. Augustine in St. Cloud. Burial will be in the Minnesota State Veterans Cemetery in Little Falls.    Jim died at his home late Friday evening.  There will be a visitation after 11:00 AM Thursday at the church in St. Cloud.  Arrangements are being made by the Miller-Carlin Funeral Home in St. Cloud.Jim was born September 29, 1914 in South St. Paul, to Thomas and Margaret (McGuire) Mahoney.  When Jim was a year old, his family moved to the  rural farming community of  Perham.  He graduated from High School and served in the U.S. Navy from 1942 until 1945.  Jim was assigned to serve on the USS Destroyer, Stembel 644 and he participated in nine major campaigns in the Pacific theater.   Jim married Margaret Mair on January 30, 1943 in Chicago.  After Jim’s was discharged in 1945, he attended the St. Paul Vocational school for watch making and repair and in 1948, he established Mahoney Jewelry in Perham.  Jim was encouraged by Miracle Ear to establish a hearing center in St. Cloud.  Jim founded the St. Cloud Hearing Aid Center in 1966 when he and Margaret moved to St. Cloud.  He owned that business until 1978 when he was joined by his son, Michael.  After his retirement, he enjoyed traveling, watch making, clock repair and time with his family.  He was a member of St. Augustine’s Catholic Church and he was a lifetime member of the VFW.Jim is survived by his wife, Margaret Mahoney, St. Cloud; his children, Michael Mahoney, St. Cloud; Dennis Mahoney, Perham and Eileen Mahoney-Johnstone, Milwaukee, WI.  He is also survived by  four grandchildren and two great-grandchildren.He is preceded in death by his parents, his daughter, Patrice Mahoney, and his brothers, William and Paul Mahoney and his sister, Helen Nelson.

Sorry to hear that your father has died. What an amazing life he lived! We’re glad that you followed in his trade – just know we are thinking of you and your family. -Peggy