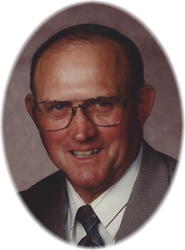 Mass of Christian Burial celebrating the life of James “Jim” Atkinson, age 86, of Upsala will be at 11:00 AM on Saturday, June 6, 2015 at St. Mary’s Catholic Church in Upsala.  Father John Odero will officiate and burial will take place in the parish cemetery.  Jim passed away Saturday morning with family at his side at the Mother of Mercy Nursing Home in Albany.  There will be a visitation at the church from 4:00-8:00 PM Friday, June 5, 2015 and again after 10:00 AM until the time of service Saturday morning.  Parish prayers will be at 7:00 PM Friday evening at the church.  Arrangements are being made with Miller-Carlin Funeral Home, Upsala.

Jim was born on October 13, 1928 to Fred and Elizabeth (Stueve) Atkinson in Freeport.  He grew up with 11 siblings on the family farm.  On October 15, 1951, he married Marie Czech at St. Edward’s Church in Elmdale and their union welcomed seven children.  Jim was a farmer his entire life, he was a hard worker and he took great pride in whatever he did.  He also was a Mechanic at Upsala Motors for over 25 years and worked on farm equipment.  Jim enjoyed working on small engines as a hobby and won several trophies for racing snowmobiles.  He was a jack-of-all-trades and could do anything he set his mind to: what he didn’t know, he taught himself.  In his lifetime, he did electrical work, plumbing, and carpentry.  Jim built cabinetry, machinery, two barns, and four homes and was known for all the help he gave his family.  He was an extraordinary man who was strong and determined.  He loved, and was proud of, his children and he adored his grandchildren and his great-grandchildren.  He was a member of St. Mary’s Church in Upsala and served on the Upsala School Board.

He is preceded in death by his parents Fred and Elizabeth, an infant son, an infant sister Mary, his brothers Jerome and Ervin, and sisters-in-law Marina Atkinson and Evelyn Atkinson.

Mass of Christian Burial celebrating the life of James “Jim” Atkinson, age 86, of Upsala will be at 11:00 AM on Saturday, June 6, 2015. Father John Odero will officiate and burial will take place in the parish cemetery.

I’m so sorry to hear about Jim’s death.  My prayers go out to Marie and the family.  I’ll offer the Mass on Friday for Jim.  Many prayers … Fr. Mike