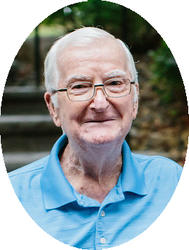 James, W. Carlin, Age 91 of Vadnais Heights died peacefully at his home on Sunday, November 26. Mass of Christian Burial will be at noon on Tuesday December 5 at St. Mary of the Lake Catholic Church in White Bear Lake with visitation one hour prior to mass.

James was born December 18, 1925 in Clear Lake to James and Mary (O’Brien) Carlin.  He entered the U.S. Army Air Corps during WWII.  He graduated from St. Cloud State University with a degree in Education.  He married Jule Ann Johnson on February 3, 1951 at St. Marcus in Clear Lake.  He taught in Elk River and Orono before becoming head of education at the St. Cloud Reformatory.  He returned to public schools, teaching physics and coaching at Alexander Ramsey High School in Roseville. During his teaching career he also attended the University of Minnesota where he earned a Masters Degree.   He and Jule settled in Falcon Heights where they raised their family.  After retiring in 1983, Jim and Jule spent winters at their home in Winter Haven, Florida and summers at their cabin on Lake Julia in Clear Lake.  More recently, they lived in White Bear Lake before moving to Vadnais Heights.

He is preceded in death by his parents, and his brothers and sisters, Charlotte Fladung, Margaret Henry, Edward Carlin, Delores Emmerich and Leo Carlin.

In lieu of flowers, please make donations to the American Heart Association.

Thanks for all the wonderful memories at your cabin. I will miss your perpetual smile. Love and condolences to all, Patrice

I have many happy memories from Lake Julia including the little dog, TJ, the cookoo clock, and eating watermelon with lots of cousins.  When I picture Uncle James, it is also always with a smile.        Thinking of you all,   Joanie

Praying for your family at this time of loss. The times at the lake were the best. With love and respect Mike and Gayla Emmerich

Praying for your family at your time of loss. The times at the lake were always the best. With love and respect Mike&Gayla