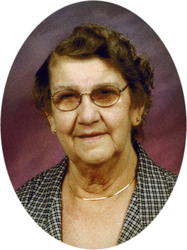 The Mass of Christian Burial, Celebrating the life of Irene M. Czech, age 82, of Holdingford, will be 10:30 AM Friday, July 8 at the Church of All Saints, River Street, Holdingford  (formerly St. Mary’s) due to road construction near Church of All Saints, Cedar Street (formerly St. Hedwig’s).  Fr. Mark Stang will preside.     Burial will be in the St. Hedwig’s Cemetery.  Irene died Tuesday at the Mother of Mercy Nursing Home in Albany.  There will be a visitation from 4-9:00 PM Thursday, and again after 9:30 AM Friday at the Miller-Carlin-Brenny Funeral Home in Holdingford.  All Saints parish prayers will be at 5:30 PM and the St. Hedwig’s Christian Women/Rosary Sodality will pray at 7 PM Thursday at the funeral home.Irene was born February 27, 1929 in Todd County to Joseph and Josephine (Eiynck) Chromey.    She married Theodore Czech on June 21, 1950 in St. Francis of Assisi Church in St. Francis.  The couple farmed together and raised their eight children.  Irene was a member of St. Hedwig’s Catholic Church, The Rosary Sodality, the St. Hedwig’s Christian Women, and the National Wildlife Federation.  She loved birds and she loved to fish.  Her favorite hobbies included quilting, crocheting, gardening, reading and most of all, she loved her grandchildren and great-grandchildren.Irene is survived by her husband, Theodore, Holdingford; her children; Debbie (John) Binsfeld, Holdingford; Cheryl (Chuck) Barnes, Holdingford;  Floyd (Nellie) Czech, Glencoe;  Bonnie (Robert) Soltis, Upsala; Pamela (Donald) Fischer, Albany; Virgil (Sheila) Czech, Holdingford; Loran Czech, Holdingford; Gwen (Al) Seitz, Sauk Centre, 22 grandchildren, 23 great-grandchildren, and 1 step-granddaughter  She is also survived by her brothers, Clarence Chromey, Richmond; Edward Chromey, Wadena; and Ervin Chromey, Blaine; and many relatives and friends.Irene is preceded in death by her parents, her granddaughter, Terri Jane Soltis, great-granddaughter, Ava Marie Fischer, and her brothers and sisters; Leona McArthur, Caroline Broil, Roman Chromey, Norbert Chromey, Louise Mager, Juletta Rakotz and Leander Chromey.

There will be a visitation from 4-9:00 PM Thursday, and again after 9:30 AM Friday at the Miller-Carlin-Brenny Funeral Home in Holdingford. All Saints parish prayers will be at 5:30 PM and the St. Hedwigs Christian Women/Rosary Sodality will pray at 7 PM Thursday at the funeral home.