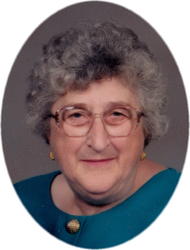 The Mass of Christian burial, celebrating the life of Ione T. Warzecha, age 84 of Bowlus, will be 10:30 AM Saturday, June 29 at St. Stanislaus Catholic Church in Bowlus. Burial will be in the parish cemetery. Ione died Tuesday from injuries received in a car accident. There will be a visitation from 4-9:00 PM Friday at the church in Bowlus. St. Stanislaus parish prayers will be at 5:00 PM Friday at the church. Arrangements are being made by the Miller-Carlin Funeral Homes.Ione was born October 15, 1928 in Bowlus to Frank and Catherine (Opatz) Waletzki. She graduated from High School and married Sylvester Warzecha on October 3, 1950 in St. Stanislaus Catholic Church in Bowlus. The majority of their years together they farmed neer Bowlus. Later they owned several businesses then retired in Elmdale. Recently, the couple moved into Sauk Rapids. Ione held most of the local offices in Christian Mothers and the Legion Auxiliary and even a few in the Diocesan Council of Catholic Women for the St. Cloud Diocese. She was a member of St. Stanislaus in Bowlus, and she also regularly attended St. Edwards in Elmdale. Ione was also a member of the Christian Mothers, the DCCW and the Legion Auxiliary.Ione is survived by her husband, Sylvester Warzecha, Sauk Rapids; her children; Kevin (Joan) Warzecha, Royalton; Rick (Rosie) Warzecha, Royalton; Diane (Art) Selinger, Little Falls; Karen (Mike) Oldakowski, Royalton; Lenore (Fred) Booth, Avon; Elaine (Dan) Stafki, Browerville; Cheryl (Tim) Klisch, Royalton; Randy (Kelly) Warzecha, St. Cloud; 31 grandchildren and 41 great-grandchildren. She is also survived by her sister, Johanna Jendro, Little Falls and her daughter-in-law, Debbie Warzecha, Sartell.Ione is preceded in death by her parents; her son, Mike Warzecha and brother-in-law, Clarence Jendro.

Visitation will be from 4-9:00 PM, Friday June 28 Parish Prayers will be at 5:00 PM at the church Friday evening

Visitation will be held at the St. Stanislaus Catholic Church in Bowlus

Mass of Christian Burial will be at the St. Stanislaus Catholic Church in Bowlus

Dear Randy and family – sending condolences; I was so sorry to hear of the loss of your Mother. You are in my prayers during this difficult time for you, all the grandchildren and great-grandchildren and your family.

Our thoughts and prayers are with your family at this sad time. May she rest in peace in God’s loving care!
Peace to all of you…

Lenore,
Sorry to read about the passing of your mother. My condolences to you and your family. Embrace the many memories.