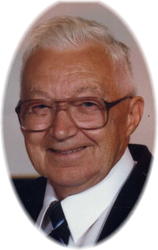 Mass of Christian Burial, Celebrating the life of Hilbert Braun, age 88 of Avon, will be 10:30AM, Friday January, 4th at the Immaculate Conception Catholic Church in St. Anna. There will be a visitation from 4:00-8:00PM Thursday January, 3rd at the Miller-Carlin Funeral Home in Albany and again after 9:30AM at the church in St. Anna. Arrangements are being made with the Miller-Carlin-Brenny Funeral Home in Albany.Hilbert was born September 8th, 1924 in Buckman Village to Joseph and Tina (Simon) Braun. He married Doloris Smith on September 3rd, 1951 in Avon. Hilbert was a farmer, worked at Franklin in St. Cloud and was the owner of Braun’s Tavern in St. Anna. He was a member of the Catholic Order of Foresters and the St. Anna Sportsman club. He is survived by his children; Doreen (William) Maile, Avon; Joseph (Carol) Braun, St. Joe; Diane (James) Raden, Waite Park and Monica Braun, St. Cloud; 5 grandchildren; 2 step-grandchildren; 9 great-grandchildren and 2 step-great-grandchildren.He is preceded in death by his parents Joseph and Tina Braun and his wife Doloris Braun and his siblings Harold, Ervin, Molly and Loretta.

There will be a visitation from 4:00-8:00PM Thursday January, 3rd at the Miller-Carlin Funeral Home in Albany and again after 9:30AM at the church in St. Anna.

Joe and Carol- Our sincere sympathy goes out to you and your family. Our prayers go your way as you are saddened by your dad’s passing. May he enjoy the fruits of Heaven with our good Lord. We hope to see you sometime soon. Hugs!