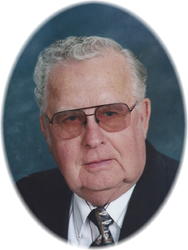 Mass of Christian Burial celebrating the life of Henry N. Heying, age 89, of Saint Cloud will be 11:00 AM on Thursday, February 5, 2015 at Church of the Holy Spirit in Saint Cloud.  Fr. Timothy Gapinski will officiate and entombment will follow at Assumption Cemetery.  Henry passed away at home early Monday morning surrounded by family.  There will be a visitation from 4:00-7:00 PM on Wednesday, February 4, 2015 at Miller-Carlin Funeral Home in St. Cloud and again after 10:00 AM Thursday at the church.  Parish prayers will be at 4:30 followed by the VFW praying the rosary at 5:00 PM Wednesday evening at the funeral home.

Henry was born on October 20, 1925 to Bernard and Katherine (Kohorst) Heying in Richmond.  He was from a family of 13 siblings and graduated from high school before entering the military.  Henry served in the United States Army for two years.  He married Kathleen O’Driscoll on November 26, 1960 at St. Joseph’s Catholic Church in Waite Park, and together they raised two sons.  He worked as a Telegrapher for Great Northern/Burlington Northern Railroad, and retired in 1986 after 36 years.  Henry was actively involved in the real estate business in St. Cloud and started Able Agency, Plaza Real Estate, and Real Estate Consultants of St. Cloud.  He was also a Commercial Real Estate Developer.  He built the Piggly Wiggly/Red Owl in Waite Park and, at the age of 72, he developed Anguishire Meadows of St. Cloud.  Henry was a man whose actions spoke louder than words.  He led by example, always putting family first.  Henry was a member of Granite Post VFW 428, Waite Park Legion 428, Knights of Columbus, the Moose Lodge, and Holy Spirit Catholic Church.

Henry’s family would like to thank St. Croix Hospice and the staff at Legends at Heritage Place for their wonderful and loving care.  They ask that you remember to support Alzheimer’s research.

The familyasks that you remember to support Alzheimers research.