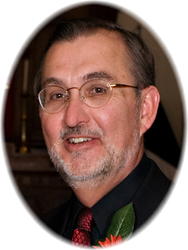 Greg was born April 2, 1952 to Lois (Broxmeyer) and Louis Becker in Bismarck, ND.  After graduating from Mary College in Bismarck with an English degree, he returned to work for Mary College (later University of Mary) as the Director of Public Relations from 1978 to 1989.  Greg left the University of Mary to accept a position as the Director of Publications and later the Director of Graphic Services for the College of St. Benedict and St. John’s University, where he worked from 1989 until his retirement in 2015 due to illness.

Throughout his career, Greg earned a number of national awards from the Council for Advancement and Support of Education (CASE) and was named “Photographer of the Year” for two consecutive years (1984-1985).  Over his 26 years of college/university communications work, Greg earned 11 national CASE awards and the University of Mary Alumni Recognition Award in 1992.  Examples of Greg’s creativity, designs and photography remain integral parts of all three campuses.

Greg’s passions included photography, music, drawing, painting, theater and literature, and he especially enjoyed sharing & discussing those passions with others.  In 2013, he published a book, A Light Shining, as a tribute to the Benedictine Sisters who were his mentors and friends throughout his life.

In turn, Greg paid it forward through mentoring and friendship to a new generation of student workers, international students, and countless other students.  Like his mentors did for him, he helped spark, encourage and nurture the dreams and passions of these students.  He was also proud to work with numerous talented colleagues, who came to be wonderful friends.

On October 2, 1976, Greg married Karla Flemmer in Bismarck and they welcomed two sons to complete their family.  Greg was devoted to his grandchildren, his sons and daughters-in-law, and his wife.  He treasured the time spent with each of them on numerous vacations, on day trips and at his home.

In 2014, Greg was diagnosed with ALS and faced his illness with courage, grace, dignity, and an unwavering concern for others.  He was filled with gratitude for all of the support he received from those who so willingly gave of their time to assist with his care as his health failed.  As he did throughout his life, he continued to use the power of laughter to help love shine through even the most challenging of situations.

Greg is preceded in death by his parents, his father-in-law Walter Flemmer, his sister-in-law and her husband Kris & Ken Jennings, and his niece Jessica Mosbrucker.

The family would like to extend a special “Thank You” to Dr. Tiffany Rickbeil, Dr. Paula Lindhorst, and the staff of CentraCare Hospice (Deb, Lori, Cathy and Tracy) for their excellent work and their friendship during Greg’s illness.

Greg preferred that any memorials be directed to either the Sisters of the Annunciation Monastery in Bismarck ND, or the monks of St. Johns Abbey, Collegeville MN.

A wonderfully gifted talented and generous soul! Greg really had an artistic look, touch and design we call the “Greg Becker style” . He designed art work for two of my CD’s and multiple college jazz logos. We also utilized his keen eye with a camera for promotional material. A sweet and gentle man that we will greatly miss.

Dear Mike and Matt and your Mom too,

We are truly sorry for your loss. Our hearts are aching knowing that you lost your Dad at such a young age and that he was an important part of your lives. We have been recalling all our memories of all of you during our Scouting years together. All the fun we had during the camp outs and activities were very fun and memorable for us and we hope you too.

We are sadden by your fathers death at such a young age. But we hope that the memories you made with him will help you through this most difficult time now and the months ahead. Know that we are thinking of you and your entire family. May your Dad rest in peace knowing that he did an awesome job in shaping your lives, and installing great morals and ethics with you both. You are your Dads sons. He did a wonderful job with you both. We saw that in you while working with you all. It was a pleasure doing it as your Dad among the other parents in the troop was a thoughtful, caring person, who loved you both unconditionally, and it showed all the time when we saw you together.  Just know we are thinking of you and that we are praying for you all. May your family gather the strength you need together and may your memories give you the fortitude to carry on your Dads legacy. Blessings to you all.

I am so sorry for your loss and my prayers are with you during this difficult time.

Karla and famiy, we are so sorry to hear about Greg. Our thoughts and prayers are with you and your family. Cherish the memories. Hugs to you.