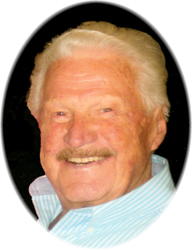 Services celebrating the life of Gerald “Jerry” Barthelemy, age 89 of St. Cloud, will be 12:00 Noon, Saturday, April 20 at the Calvary Community Church in St. Cloud. Pastor Matthew Molesky will officiate, burial will be in the Minnesota State Veterans Cemetery, Little Falls. Jerry died unexpectedly Tuesday at the St. Cloud Hospital. There will be a visitation after 11:00 AM Saturday until the time of the services at the church. Arrangements are being made by the Miller-Carlin Funeral Home in St. Cloud. Gerald was born October 10, 1923 in St. Cloud to George and Mary (Luckemeyer) Barthelemy. He served in Pacific Theater as a Marine during WWII. Jerry married Viola Roberts in 1951, she died in 1975. Jerry married Shirley Mausolf on June 5, 1982. He worked as a production manager for Cold Spring Granite, retiring in 1984. He was a member of Calvary Community Church and the Marine Corp League.Jerry is survived by his wife, Shirley, St. Cloud; his children; Nancy (Douglas Smith) Barthelemy, California; Lance Barthelemy, California; Colleen (Mike) Sacchetti, Eveleth; Thomas (Sheri) Mausolf, Aurora; Brenda (Tom) Foosness, Virginia; Laurie Olson, Waite Park; and Gary (Cynde) Mausolf, Tustin, MI. He is also survived by his brother and sister, Roland (Paula) Barthelemy, Cold Spring, Mary Jane (David) Morgan, Omaha, NB; sisters-in-law, Carol Barthelemy, Bloomington, Eileen Barthelemy, St. Cloud; 11 grandchildren and 11 great-grandchildren.Jerry is preceded in death by his parents, his first wife, Viola, and his brothers, Roger Barthelemy and Thomas Barthelemy.

Services will be at Calvary Community Church

Thoughts and Prayers are with you and your Family

I will always remember the many time I got to play golf with my Dad, Ken, and the “Barthelemy boys”. It is hard to believe they are all gone now. I like to think they are getting together again and getting nothing but pars and birdies. Jerry was a good friend to my Dad and I am sure you are all missing him. Take care Shirley, I am sorry for your loss.